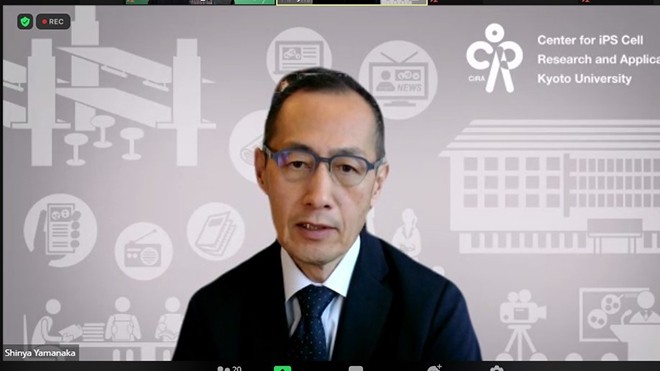 Shinya Yamanaka is interviewed online on March 22 ahead of his resignation as director of Kyoto University’s Center for iPS Cell Research and Application (CiRA). (Ryosuke Nonaka)

Nobel laureate Shinya Yamanaka called his decision to step down as director of Kyoto University’s Center for iPS Cell Research and Application (CiRA) at the end of March "one of the biggest decisions in my life."

His resignation will allow Yamanaka, 59, to spend more time researching induced pluripotent stem (iPS) cells, which can be reprogrammed into becoming different types of cells in the body.

“From now on, I would like to be committed to carrying out my basic research more than I have ever been,” he said in an online interview on March 22 with media outlets, including The Asahi Shimbun,

Yamanaka was co-recipient of the Nobel Prize in Physiology or Medicine in 2012 for his groundbreaking work with iPS cells.

He has served as director of CiRA for 12 years over six terms, since it was established in 2010.

After resigning as director, Yamanaka will continue his research as a professor at CiRA.

“I don’t know how many years I have left as a researcher, but I would like to spend at least 50 percent (of my time) on my research,” he said.

Yamanaka will also assist real-life applications of iPS cells by continuing as representative director of the CiRA Foundation, which stocks iPS cells and supplies them to universities or businesses for research on treatment of diseases.

He expressed belief that businesses in the future will be major players in applying iPS cells for use in the real world, adding that the CiRA Foundation’s role is to help companies do so.