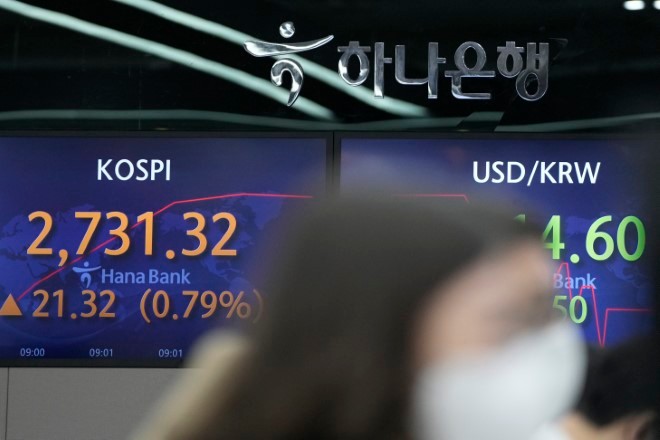 Asian shares rose Wednesday, following a rally on Wall Street led by technology companies, although investors remain concerned about the war in Ukraine and inflation.

Benchmarks were higher across the Asian region, despite worries about rising energy costs. Oil prices rose, while the dollar gained against the Japanese yen.

Investors were also closely watching what might happen with President Joe Biden joining a NATO meeting and EU Summit Thursday in Europe, where sanctions and the Russian oil embargo will likely top the agenda.

Ukrainian President Volodymyr Zelenskyy was set to make a much anticipated online speech in Japan's parliament. Japan, which has abided by a pacifist constitution after its defeat in World War II, has taken an unusually vocal position on the war in Ukraine, joining in sanctions against Russia alongside the Western nations.

“With few levers remaining to pressure Russia short of military intervention, the market is beginning to price in the loss of a significant amount of Russian oil needing to be backfilled. It could take years for Russian oil markets to normalize, if ever,” said Stephen Innes, managing partner at SPI Asset Management.

Bond yields rose sharply for the second day in a row, reflecting expectations of more aggressive interest rate hikes by the Federal Reserve as the central bank moves to squelch the highest inflation in decades. The yield on the 10-year Treasury climbed Wednesday to 2.41 percent from 2.30 percent late Monday. The yield, which influences interest rates on mortgages and other consumer loans, was at 2.14 percent late Friday.

The rise in bond yields and stocks comes a day after U.S. Federal Reserve Chair Jerome Powell said the central bank was prepared to move more aggressively in raising interest rates in its fight against inflation, if it needs to do so. Powell said the Fed would raise its benchmark short-term interest rate by a half-point at multiple Fed meetings, if necessary.

“Maybe investors are feeling that with the Fed taking more of a proactive approach early on it won't have to slam on the brakes later,” said Sam Stovall, chief investment strategist at CFRA.

Markets have been choppy as Wall Street adjusts to slower economic growth now that federal spending on various stimulus measures has faded away.

“This is actually fairly normal, but it doesn’t feel normal because the last few years have been really strong,” said Matt Stucky, senior portfolio manager at Northwestern Mutual Wealth.

Last Wednesday, the central bank announced a quarter-point rate hike, its first interest rate increase since 2018. The Fed hasn’t raised its benchmark rate by a half-point since May 2000.

Energy and commodity prices were already high as demand outpaced supply amid the global economic recovery, but the war in Ukraine has pushed oil, wheat and other prices even higher. Those higher costs and shipping problems make it more expensive for businesses to operate. Many of those costs have been passed on to consumers and higher prices for food, clothing and other goods could lead them to cut spending, resulting in slower economic growth.

Investors will soon start readying for the next round of corporate earnings reports as the current quarter nears its close at the end of March, and that could provide a clearer picture of how industries continue handling rising costs.