Northern Japan towns struggle to prepare for event of a megaquake 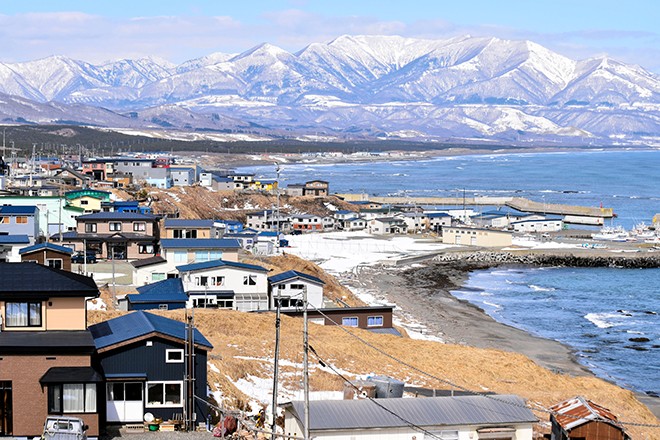 From long distances to evacuation sites to a lack of appropriate shelter structures and warm clothing, municipalities in Hokkaido and the Tohoku region are struggling to plan for a tsunami caused by an ocean trench megaquake.

Faced with harsh climates, geographical challenges and stretched budgets, that task is proving difficult for many local governments.

The central government projects that a magnitude-9.1 megaquake would cause as many as 199,000 fatalities if one struck late at night in winter in the Japan Trench, part of the Pacific Rim of Fire off northeastern Japan.

It also projects up to 100,000 deaths in the event of a magnitude-9.3 megaquake striking the Chishima Trench, which lies off Tokachi in Hokkaido and stretches to the Kuril islands.

In the town of Erimo, at the southern end of the Hidaka mountain range in central Hokkaido, houses line the seven fishing ports on Cape Erimo that faces the Pacific Ocean.

The Hokkaido government estimates that a tsunami of up to 26 meters could sweep the area roughly half an hour after a megaquake in the Chishima Trench.

Most of the houses in Erimo are in areas expected to be flooded by such a tsunami, but the town has no facilities where residents can seek shelter from a disaster like that.

Erimo conducted an evacuation drill late in the afternoon of March 2 in a scenario based on an earthquake striking the area in the early hours in mid-winter.

In the Erimo-Misaki district, elderly residents rode separately in 70 cars as they evacuated to a parking lot at an altitude of 55 meters. It took about 20 minutes to bring them to safety.

But the head of a residents’ association warned that some may not be able to get there within half an hour if a quake hits the area late at night because they would need extra time to get themselves ready.

During the drill, many residents did not bring anything to keep them warm. Each district stockpiles stoves, blankets and makeshift beds at local evacuation centers. But they can only cover about 30 percent of Erimo’s residents. The town stocks up on those items every year but can only spend up to 2 million yen ($16,520).

Erimo Mayor Masaki Onishi, 68, voiced concerns that National Road No. 336, which runs along the eastern and western coasts of Cape Erimo, could be cut off in a tsunami. If that would happen, then people injured in the disaster would not be able to be transported to large hospitals because the road is the only highway linking the town and its neighboring municipalities.

Onishi said he has been asking the central and Hokkaido governments to construct a bypass road for the past five years, but no progress has been made.

In Sendai, the capital of Miyagi Prefecture, more than 100 people took shelter in coastal evacuation towers and other structures following the March 16 earthquake.

The city built evacuation towers and buildings at 11 locations on the Pacific coast following the Great East Japan Earthquake and tsunami. To keep out the cold, the city stocks blankets and stoves at those structures and built room walls in the evacuation towers that can protect people from the wind.

In Iwate Prefecture, the death toll from an ocean trench megaquake could surpass that from the 2011 disaster and reach 11,000 under a worst-case scenario. The prefecture only has one evacuation tower in Kuji as the construction costs are high and there are many areas at higher ground to which people in urban areas can easily evacuate.

In its report on disaster-preparedness measures for an ocean trench megaquake, a working group within the Central Disaster Prevention Council recommended building towers and buildings where people can take shelter from an ensuing tsunami.

According to data from the Cabinet Office, 15,806 of these structures were constructed across the country as of April 2021.

But roughly 85 percent of them are in areas expected to be hit by a megaquake along the Nankai Trough off the Pacific coast. Coastal municipalities in Hokkaido and four prefectures in Tohoku near the focus of a megaquake in either the Japan Trench or the Chishima Trench have constructed 743 evacuation towers and buildings--less than 5 percent of the nationwide total.

Municipalities can designate tall coastal public facilities as evacuation buildings and build new evacuation towers if there are no such facilities.

Hamanaka, Hokkaido, is considering constructing some towers. But a town official said the project would place a huge financial burden on the municipality, given that the central government pays only half the cost incurred to build those towers.

The government is expected to raise that to two-thirds as it revises a special law enacted in 2004 to prepare the public for an ocean trench megaquake.

But even that has municipalities fretting.

“Shouldering one-third of the cost is still a huge burden on a town with few financial resources,” said an official of another coastal town in Hokkaido. “If we take measures against the cold, the cost increases further. We are asking for comprehensive (financial) support.”