Zelenskyy appeals to Japan for more sanctions against Russia 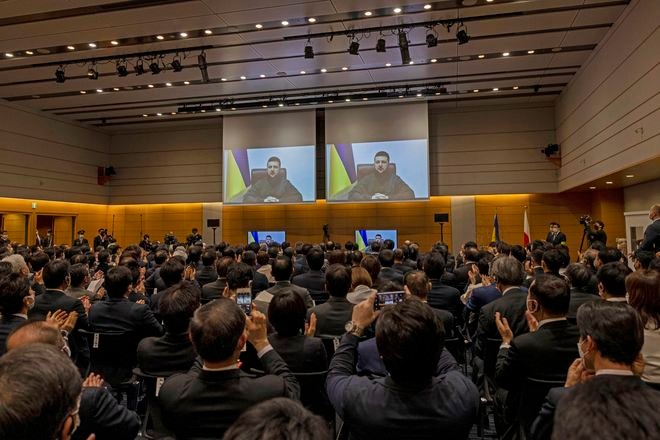 Ukrainian President Volodymyr Zelenskyy, in a virtual address to Japan's parliament on Wednesday, called on the lawmakers to keep up sanctions against Russia over its invasion of Ukraine to pressure Moscow into seeking peace.

Zelenskyy praised Japan for becoming the first Asian country to sanction Russia and asked Tokyo to go even further. He said trade with Russia should be banned and that foreign companies should withdraw from the Ukrainian market in order to prevent their investments from flowing into Russia.

Japan has acted tough against Russia since the invasion, in line with other Group of Seven countries, although Tokyo’s moves have triggered retaliation from Moscow. Russia this week announced it would discontinue peace treaty talks with Japan over the disputed Kuril Islands and withdraw from joint economic projects there, citing Tokyo’s sanctions.

But a compromise by Japan could set a bad precedent in East Asia, where China increasingly makes assertive military actions.

Zelenskyy’s speech was broadcast live in a parliamentary hall packed with hundreds of lawmakers, including Prime Minister Fumio Kishida.

During his approximately 10-minute speech, Zelenskyy, appearing in his now trademark olive-colored top, also criticized Russian attacks on Chernobyl, currently entombed after the 1986 explosion, saying Russia turned a nearby nuclear waste storage site into a battlefield. Imagine, he said, how long it will take to clean up the situation there when the war is over.

Zelenskyy, speaking through an interpreter who translated his Ukrainian into Japanese, also raised an alarm about the possibility of Russia’s use of nuclear and chemical weapons.

Zelenskyy criticized the United Nations Security Council, in which Russia and China are among five permanent members, as dysfunctional and in need of reform.

Zelenskyy's address came hours before Kishida was to leave for Brussels to join other leaders of the G-7 countries on the sidelines of an emergency NATO leaders' meeting.

Japan has expressed solidarity with Ukraine and provided it with humanitarian assistance and non-lethal military equipment such as bulletproof jackets, binoculars and medical equipment. Japan, though notorious for its strict refugee and immigration policy, has also pledged to accept Ukrainians fleeing from their country.

Foreign dignitaries, including former U.S. President George W. Bush and former Philippine President Gloria Macapagal Arroyo, have delivered addresses in person during visits to Japan as state guests, but an online speech by a foreign leader is unprecedented.

Zelenskyy has made online speeches to lawmakers in several other countries, including the United States, Britain, Germany, Canada, Israel and the European Union, often striking a chord with audiences by putting Ukraine's ordeal into the historical contexts of other nations.