Giant panda cubs Lei Lei and Xiao Xiao are shown to the media at Tokyo’s Ueno Zoo in the capital’s Taito Ward on March 23. The animals went on public display two and a half months ago. (Nobuo Fujiwara) 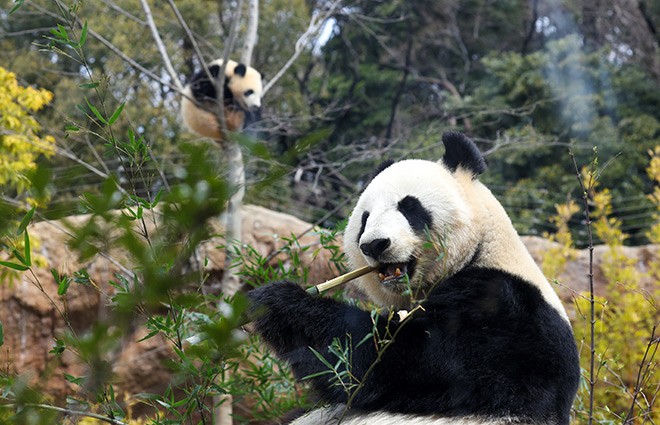 Giant panda cubs Lei Lei and her twin brother Xiao Xiao took no notice of the commotion outside their enclosure when Tokyo’s Ueno Zoo reopened for public viewing of other animals, including their older sister, on a reservation basis March 23 for the first time in two and a half months.

Instead, the cubs, born at the zoo in June, napped on tree branches.

The zoo in the capital’s Taito Ward had planned for a Jan. 12 debut but allowed only very limited public viewing in mid-January after the rest of the facility closed the previous day due to the spread of the Omicron variant of the novel coronavirus in the metropolis.

Media representatives were given a sneak preview March 23.

As a temporary precaution against the virus, the zoo only allows a maximum of 4,000 visitors with prior reservations each day.

Families patiently formed lines ahead of the zoo’s reopening.

Xiang Xiang, the cubs’ older sister, was displayed the same day at the panda house in the zoo’s East Garden.

“I waved to her because I was so excited to be finally able to see her again,” said Sakiko Nagashima, 48, a resident of Tokyo’s Nakano Ward and self-confessed panda nut who headed straight for the panda house as soon as she entered the zoo.

A public viewing of the cubs and their mother, Shin Shin, is scheduled for March 25 at Panda Forest, located in the zoo’s West Garden.

Those wishing to see the trio need to apply by lottery for a ticket in advance on a dedicated website: (https://tokyo-zoo.e-tix.jp/).

Up to 2,800 lottery winners will be eligible to visit each day until April 3. The zoo plans to increase daily visitor numbers to 4,400 after that.

(This article was written by Honomi Homma and Taichi Kobayashi.)