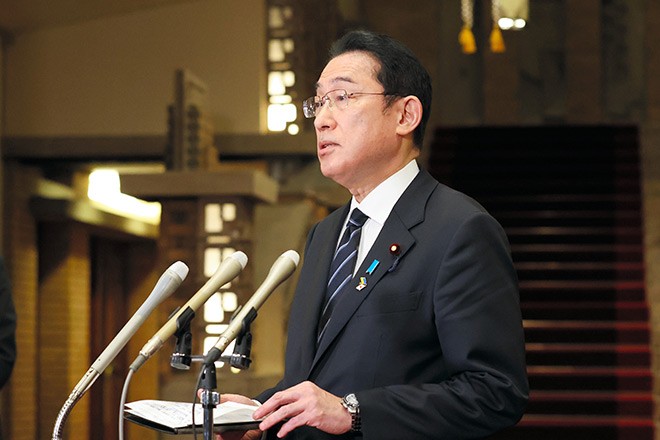 However, it remains to be seen if the government will also respond to Zelenskyy’s request for Japan to cut off all trade with Russia to protest the military invasion that has put the entire world on edge.

Kishida and Foreign Minister Yoshimasa Hayashi were among 300 or so Diet members who gathered to listen to the Ukrainian president’s explanation of the crisis his country is facing.

“We can never allow the reckless actions taken by Russia,” Kishida told reporters afterward. “Japan will consider further sanctions against Russia as well as additional humanitarian support on top of the $100 million (about 12 billion yen) already pledged.”

Japan was criticized for its lukewarm sanctions against Russia after it annexed Crimea in 2014.

However, a high-ranking Foreign Ministry official said Japan had changed course this time and cooperated with the West by implementing stronger measures against Russia’s military aggression to change the international status quo.

Tokyo is also very mindful of pressure being exerted by China in the East China Sea, where the disputed Senkaku Islands are located, as well as its designs on Taiwan.

While Japan has pledged humanitarian assistance as well as non-lethal defense equipment to Ukraine, it has not yet made any decision with regard to petroleum and natural gas development projects in Sakhalin.

Western companies have pulled out of the projects, but Japan, which has invested heavily in securing stable supplies of oil resources, has sat on the sidelines, citing national security concerns.

Given that Japan has few natural resources, economy minister Koichi Hagiuda explained that the government had to make every effort to protect the economy and daily lives of the people.

Hayashi also rejected calls to ban flights by Russian jets over Japanese airspace as European nations have done in their respective areas.

Hayashi explained that geographical differences and the effects on product distribution had to be taken into consideration.

(This article was written by Ryo Aibara and Masahiro Iwao.)