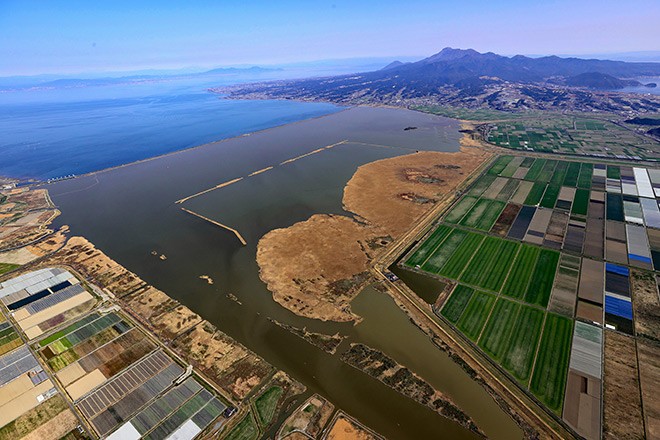 FUKUOKA--Four years failed to dampen the Fukuoka High Court's view of a protracted legal battle in Nagasaki Prefecture between fishermen and farmers over reclaimed land in a once bountiful bay.

On March 25, the court again sided with the central government and ruled that the floodgates installed in the Isahaya Bay land reclamation project did not have to be opened.

In 2018, the court had ruled that it did not have to follow through on a finalized ruling it had made in 2010 ordering the floodgates to be opened.

The initial government-led project was intended to close off Isahaya Bay both to prevent damage from flooding and to reclaim land for farming. However, local fishermen said the dike cut off the bay area and hurt their fishing operations in the Sea of Ariake.

After courts ruled in favor of the fishermen and ordered the floodgates opened, farmers who had cultivated the reclaimed land filed their own lawsuit to stop the opening on the grounds that the seawater would damage the land they had so carefully cultivated.

In the meantime, the central government also got into the action and submitted a lawsuit seeking to effectively nullify the 2010 high court's ruling.

After the Fukuoka High Court in 2018 sided with the central government, the Supreme Court in September 2019 ruled that the high court had erred in its legal reasoning and ordered it to re-examine the case.