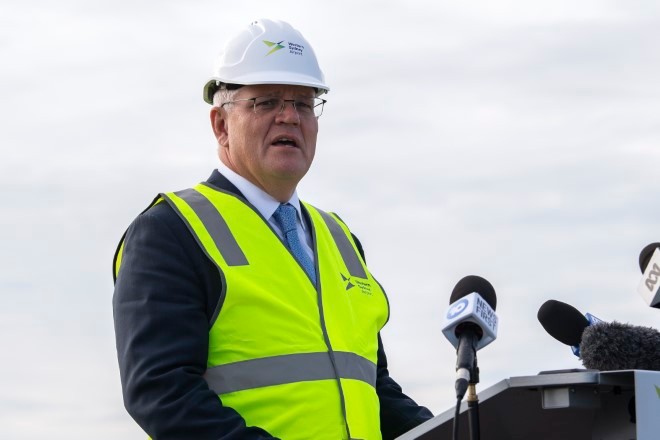 CANBERRA--The Australian and New Zealand prime ministers on Monday voiced concerns about the potential for a Chinese military presence on the Solomon Islands.

A document leaked last week indicates that China could boost its military presence in the South Pacific island nation, including with ship visits.

Australian Prime Minister Scott Morrison said he had spoken to New Zealand Prime Minister Jacinda Ardern over the weekend about the development and planned to speak to his counterparts in Papua New Guinea and Fiji later Monday.

“The reports that we’ve seen are not a surprise to us and are a reminder of the constant pressure and threats that present in our region to our own national security,” Morrison told reporters.

“This is an issue of concern for the region but it has not come as a surprise. We have been long aware of these pressures,” he added.

Ardern described the possibility of Chinese military forces stationed on the Solomons as “gravely concerning.”

“We see such acts as the potential militarization of the region,” she told Radio NZ. “We see very little reason in terms of the Pacific security for such a need and such a presence,” she added.

Ardern urged Solomons’ leaders “not to look beyond our own Pacific family” when considering the country’s security relationships.

The Solomons revealed on Thursday it had signed a policing cooperation agreement with China. But more concerning to the Solomons’ neighbors was the draft text of a broader security arrangement that was leaked online.

Under the terms of the draft agreement, China could send police, military personnel and other armed forces to the Solomons “to assist in maintaining social order” and for a variety of other reasons. It could also send ships to the islands for stopovers and to replenish supplies.

The draft agreement stipulates that China would need to sign off on any information that’s released about joint security arrangements, including at media briefings.

Questioned about the agreement last week, China’s Foreign Ministry said Beijing and the Solomons “conducted normal law enforcement and security cooperation on the basis of equal treatment and win-win cooperation.”

It was not immediately clear when the security agreement might be finalized, signed or go into effect.

The Solomons, home to about 700,000 people, in 2019 switched its diplomatic allegiance from Taiwan to Beijing, which was a contributing factor to riots in November.

Australian police have been in the capital Honiara maintaining peace since then under a bilateral security treaty established in 2017. It provides a legal basis for the rapid deployment of Australian police, troops and associated civilians in the event of a major security challenge.

In 2017, when Australian police and troops left the Solomons after 14 years, the two countries signed a bilateral treaty that would enable Australians to return at short notice at the invitation of the Solomons’ prime minister. That treaty was invoked in November and Australian police were in the air within hours of Solomons Prime Minister Manasseh Sogavare requesting help.

Australia had led a force of Pacific Islands police and troops under the Regional Assistance Mission to Solomon Islands from 2003 to 2017. It included 2,300 police and troops from 17 nations, invited by the Solomons’ government. The deployment successfully ended the conflict that killed 200 people.

Solomons opposition leader Matthew Wale said he warned Australian High Commissioner Lachlan Strahan in August last year that the government was negotiating a security agreement with Beijing that could lead to the establishment of the Chinese bases there.

“Personally, I am very disappointed in Australia in this matter,” Wale told Australian Broadcasting Corp.

“I think Australia saw this coming and if it didn’t, it should have,” Wale added.

Morrison said Australia was recasting its foreign aid to focus on the Pacific.

“We’ve been aware of the risks right across the Pacific,” Morrison said, referring to Chinese engagement.