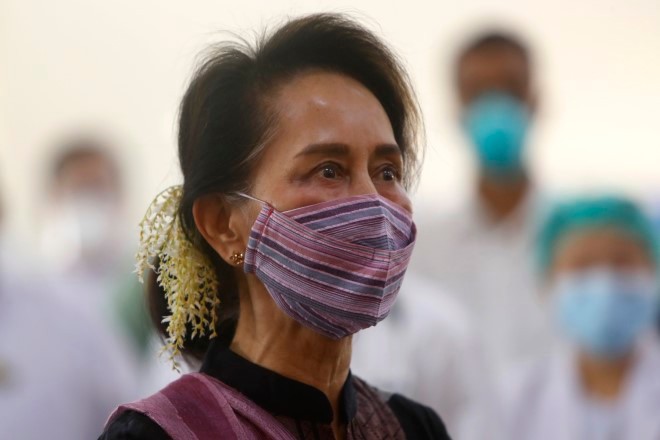 BANGKOK--Ousted Myanmar leader Aung San Suu Kyi did not attend recent court hearings in which she is a defendant because she has been quarantined due to possible exposure to the coronavirus, a legal official said Monday.

Suu Kyi is being tried in the capital, Naypyitaw, in several cases involving charges of corruption, election fraud and violating a state secrets law.

She has been detained since Feb. 1 last year when the army seized power and prevented her and her party from starting a second five-year term in office after a landslide victory in a 2020 general election.

The legal official, who is familiar with the cases involving Suu Kyi, said the 76-year-old deposed leader missed a hearing on Monday in a case involving corruption charges because she was quarantined after some of the people helping with her care were found to be infected with the coronavirus.

Suu Kyi, who has been vaccinated, has not tested positive, he said.

She is being held at an undisclosed location in Naypyitaw where she has stayed following convictions on lesser charges for which she has been sentenced to six years’ imprisonment.

The official spoke on condition of anonymity to avoid retaliation from the military government, which seeks to keep the proceedings secret. All of Suu Kyi’s court hearings have been closed to the media, diplomats and other spectators. She has not been seen or allowed to speak in public since she was arrested.

She also missed hearings on the secrets charge last Thursday and election fraud trial on Friday, and will be absent from court again on Tuesday, the legal official said.

The Health Ministry announced on Sunday 130 new COVID-19 cases and one related death, bringing the country’s total to 6,108,858 confirmed cases and 19,430 deaths.

Like other countries in the region, Myanmar is currently restoring activities that had been suspended to combat the spread of the virus.

International airlines will be able to resume operations on April 17, and cinemas have been allowed to reopen in some areas after a two-year ban.