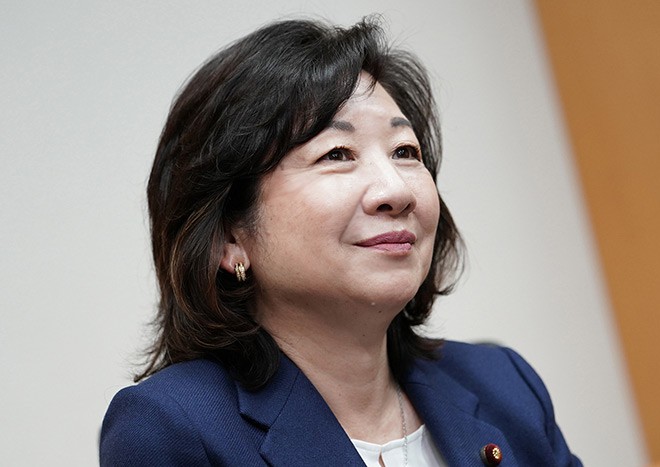 Seiko Noda, the state minister in charge of gender equality, criticized as misleading a government survey that showed record low public support for allowing married couples to have separate surnames.

According to the Cabinet Office survey results released on March 25, only 28.9 percent of voters believe the government “should establish a system that gives married couples the option to have dual surnames.

That would be the lowest ratio since 1996, when the government started the survey “on legal issues regarding family.”

In a rare move by a Cabinet member, Noda raised doubts about the results of a government survey.

“I harbor reservations over the fact that there was a question about the legal system regarding the use of birth names that was not based on reality,” she told reporters.

The format and the questions in the survey were, in fact, different from those in previous polls.

The survey was conducted from December to January on randomly selected people 18 years old or older.

The surveys had been conducted in person until the previous one in 2017. The latest survey was mailed to 5,000 potential respondents because of the COVID-19 pandemic.

The Cabinet Office received valid responses from 57.7 percent, compared with 59.0 percent for the 2017 survey.

The latest survey asked respondents what they think the government should do about the dual-surname issue, and provided three answers that respondents could choose from.

The first answer provided was government “should maintain the current single-surname rule for married couples.” It was chosen by 27.0 percent of respondents.

The largest group, at 42.2 percent, picked the second answer that the government “should maintain the current single-surname rule for married couples but establish a legal system regarding whether people can go by their birth names.”

The third answer, government “should implement a system that allows married couples to have dual surnames,” was chosen by 28.9 percent.

In the 2017 survey, a record high 42.5 percent said the government should implement a system that allows married couples to have dual surnames.

But the answers provided and their order in the 2017 and earlier surveys were different than in the latest one.

A person in charge of the survey said the changes were made because the Cabinet Office “has heard from Diet members and others that the questions were difficult to understand.”

Noda said the changed wording and order of the answers created misleading results if compared with previous surveys.

She also noted that 45 percent of the respondents were 60 or older.

“People who can most relate to the dual surname issue are those who are going to marry in the future,” she said. “I am concerned that the (survey) was disconnected from reality.”

Masaki Taniguchi, a professor of Japanese politics at the University of Tokyo, also raised doubts about the latest survey.

“The survey method was completely different, so the survey lacks continuity and cannot be compared to the previous surveys,” he said. “Between the questions asking respondents if they agree or disagree with a system allowing dual surnames, a gray option was inserted that the (government) should maintain the status quo while implementing a legal system that allows married people to conduct business under their birth names.”

Taniguchi said many people undecided on the issue likely picked the gray option.

“The results make it appear that the number of people who support a system that allows married couples to have dual surnames has drastically decreased,” he continued. “But it is natural to think that the result is due to the change of the questioning technique.”

(This article was written by Masatoshi Toda and Ryutaro Abe.)