Companies to scale back on disposable plastics in April 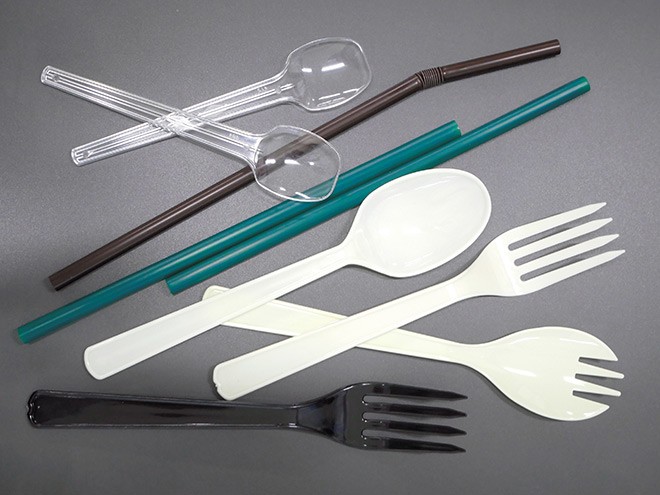 Starting next month, some business operators will have to scale back on giving out disposable plastic items--including the ubiquitous cutlery handed out at convenience stores and elsewhere across Japan.

The plastic waste recycling and promotion law will take effect on April 1, meaning that businesses will soon have to reduce their reliance on 12 single-use plastic items, including forks, spoons and toothbrushes.

But as businesses scurry to meet the fast-approaching deadline, some are finding themselves between a rock and a hard place on taking measures that would be the most effective. And environmentalists are raising concerns that the new law does not go far enough.

According to the Environment Ministry, few business operators that currently provide free plastic products will start to charge for them. Instead, most plan to take alternative measures, such as switching the type of items they hand out.

“Many business operators aim to reduce the volume of plastic products through weight-saving efforts or changing materials,” an official of the Environment Ministry’s Office for Recycling Promotion said.

Under the new law, operators of retail shops, such as convenience stores and supermarkets, eating and drinking establishments and accommodation facilities, such as hotels, will be asked to set plastic-reduction goals and reconsider how they provide these kinds of items.

They must adopt at least one of the following measures: charge for the item; ask customers if they want the item; give benefit points to customers who refuse plastic products; make plastic products more lightweight or use more eco-friendly materials; or provide recyclable products.

These businesses were previously obliged to charge for plastic shopping bags, but now they can choose from other options.

Convenience stores are already starting to snap into action.

FamilyMart Co. introduced lightweight spoons and forks with holes in the handles in January. It has also tentatively stopped handing out forks and other plastic items to customers at 10 stores in Tokyo, which started on March 10.

Seven-Eleven Japan Co. will begin using plastic spoons and forks that are made up of about 30 percent of plant-derived materials.

Lawson Inc. will phase in lightweight spoons and forks with holes in the handles. It will also adopt wooden spoons at some stores in Tokyo and Osaka.

But convenience store chains will not charge for the items because they believe it would be too difficult to obtain agreements from franchise store owners.

“It could affect sales,” a source close to the industry said.

The supermarket Benny Super in Tokyo’s Adachi Ward has a bento and deli section, and customers can pick up plastic forks and spoons near cash registers.

It will put up posters asking for cooperation in reducing reliance on plastics. But it will not take any other measures.

“If we charge fees for such plastic items, our sales will be affected,” said Tomoya Akatsu, a director at the supermarket’s headquarters. “If we change materials from plastic to wood or something else, it will increase costs.”

The National Supermarket Association of Japan, which has about 300 members of small and midsize stores, conducted a survey on the matter in January.

Dozens of stores responded to the questionnaire and about half said they have not decided what to do.

“The most that many smaller stores can do is just ask customers whether they need these kinds of plastic items,” an association representative said.

Critics say Japan’s new law lacks teeth and will achieve little compared to what is being done in other countries.

“The fundamental solution is not changing the materials or saving on weight,” said Hiromasa Otate, who works on plastics issues for Greenpeace. “(The government) should have ordered operators to charge fees or prohibited them from handing out (plastics).”

The European Union adopted a law prohibiting the distribution of some disposable plastic items, such as knives, dishes and straws, in 2019.

Japan is beginning its eco-friendly efforts far behind the EU’s more aggressive actions, and is introducing relatively weaker countermeasures, such as just having clerks ask if customers want the products.

Business operators are responsible for setting their own reduction goals, but the reduction rates and the target fiscal years are voluntary.

They are asked to announce the results of their efforts, but do not need to report them to the government.

This means Japan will face an uphill battle when it comes to making these efforts more effective.