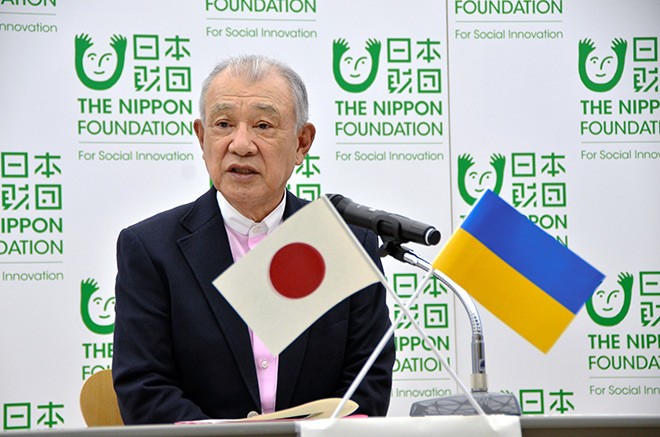 Yohei Sasakawa, the chairman of the Nippon Foundation, announces that the body will provide 5.08 billion yen ($41 million) in financial assistance to Ukrainians evacuating to Japan during a news conference in Tokyo on March 28. (Takuya Miyano)

The Nippon Foundation, a nonprofit body based in Tokyo devoted to good deeds, announced March 28 it will provide 5.08 billion yen ($41 million) in financial assistance to Ukrainians evacuating to Japan following Russia’s invasion of their homeland.

It said the money, to be disbursed over three years, is intended to cover their traveling and living costs.

The foundation estimated that as many as 1,000 Ukrainians will want to evacuate to Japan.

Of the total sum, 3.55 billion yen will be earmarked for traveling and living costs. Each evacuee will be eligible to receive 300,000 yen to cover travel expenses and 1 million yen annually for living expenses for three years.

Each household would receive up to 3 million yen per year for living expenses.

Local governments have already announced they will offer public housing to Ukrainian evacuees, so the foundation decided to provide 500,000 yen per household for purchases of home electronic appliances and other necessities.

In addition, the foundation said it will give 1.53 billion yen to NPOs working to support the daily lives of Ukrainian evacuees in Japan.

It has already dispatched personnel to Poland to set things up, and also formed the Nippon Foundation Humanitarian Assistance Team for People Displaced from Ukraine.

Yohei Sasakawa, the chairman of the foundation, explained at a March 28 news conference that the body provided medical assistance to Ukraine after the Chernobyl nuclear meltdown in 1986.

“I am deeply hurt by this war. I have been discussing about doing something for Ukraine with all the other members,” he said. “(Our estimate of the number of Ukrainians escaping into Japan) is just a guideline. This is humanitarian assistance, so we want to respond flexibly.”

For more information, the website address of the Nippon Foundation Humanitarian Assistance Team for People Displaced from Ukraine is: (https://www.nippon-foundation.or.jp/en/news/articles/2022/20220328-69127.html)