Biden says he remains focused on Pacific amid Ukraine crisis 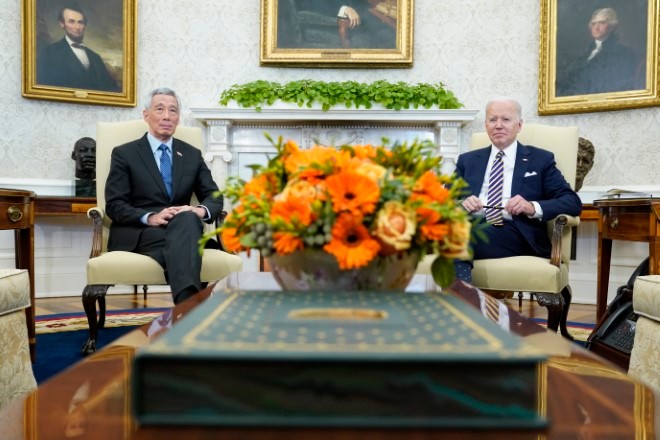 WASHINGTON--President Joe Biden on Tuesday sought to assure Singapore Prime Minister Lee Hsien Loong that his administration remains focused on the Indo-Pacific region even as they deal with the fallout of Russia's invasion of Ukraine.

Biden at the start of an Oval Office meeting with Lee said it was essential that his administration continue to work on bolstering relations with Singapore and other nations in region. The president has made adjusting U.S. foreign policy to better reflect the rise of America’s most significant military and economic competitor China a central focus of his foreign policy, but Russia's invasion of Ukraine has complicated the effort.

“Even as we address the crisis in Europe, my administration is strongly supportive of moving rapidly to implement the Indo-Pacific strategy... and the United States is a proud Indo-Pacific nation,” Biden said.

The two leaders were expected to discuss the U.S,-ASEAN relationship, promoting the return of democracy in Myanmar following last year's military coup and advancing economic growth in the region. Biden said he and Lee would also discuss the Ukraine and “freedom of the seas,” an issue of heightened importance in the region as Beijing has made territorial claims over most of the South China Sea.

Lee acknowledged that the timing of the visit underscored Biden's commitment to the region and that U.S. would continue to “strengthen its strategic interests in the region.”

Biden’s national security team has been pleased that Singapore and other Pacific partners--Australia, Japan, New Zealand and South Korea--moved relatively quickly to hit Russia with sanctions following the invasion.

Singapore, which typically waits for United Nations backing before implementing sanctions, has imposed restrictions on some exports and a ban on financial institutions from doing business with Russian banks.