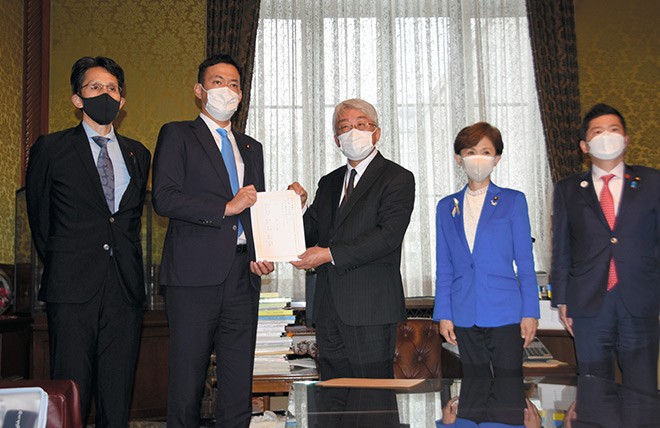 Members of the Constitutional Democratic Party of Japan submit a bill to the Diet on March 29. (Tsubasa Yokoyama)

The main opposition Constitutional Democratic Party of Japan on March 29 submitted a special bill to the Lower House to establish a new visa category for Ukrainians fleeing from the Russian invasion.

The bill defines such evacuees as people who are forced to flee from areas where their lives are in danger from war or civil war and, therefore, need protection.

The visa is for one year and can be renewed. Those who are granted the visa can work in Japan.

The Japanese government has so far described people who have fled from Ukraine as “displaced people” and allowed their entry into Japan.

They are not considered refugees, but instead are given a visa status for special activity designated by the Justice Ministry.

Takeshi Shina, a Lower House member of the CDP who submitted the bill, said the current system involves “discretionary administration, and the legal status (of Ukrainians) is extremely unstable.”

Under the CDP’s proposal, such decisions will not be left to the discretion of the justice minister.

Instead, the status of Ukrainian evacuees will be close to the one for fixed residents who have limitless freedom of activity, according to the CDP.

The party said it assumes the bill will also apply to people who have fled from Syria and Afghanistan.

The proposed bill also aims to partially ease the immigration rules for war evacuees, set up a system to issue certificates and visas to those who do not have valid passports or visas, and support applicants with health care and education services.

As part of proposed reforms of Japan’s immigration system, the CDP and other opposition parties submitted a bill to the Upper House last year to revise the criteria for refugee status.

They are expected to submit a similar bill during the current Diet session.

The CDP decided to introduce the special bill ahead of the planned immigration bill.

Yosuke Suzuki, a Lower House member of the CDP, said about the decision, “In the short term, the situation has been extremely volatile for people who are coming to (Japan) right now, so we should guarantee their status as soon as it is practicable.”