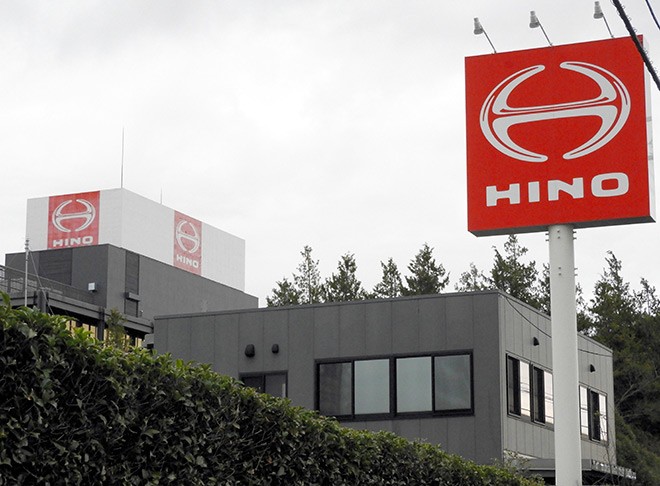 The transport ministry on March 29 revoked its certification of eight models of vehicle equipped with deficient engines manufactured by Hino Motors Ltd., a subsidiary of auto giant Toyota Motor Corp.

It marked the first time for the government to invoke the Road Transport Vehicle Law in such a matter since the legislation took effect in 1951, and threatens to bring production of those models to a halt for several months, industry experts said.

The company sells trucks and buses in 90 or so countries.

Hino Motors admitted March 4 that it falsified results during performance testing of exhaust emissions and fuel economy of four types of engines.

Authorization is a legal endorsement given by the government under the law enacted 71 years ago.

Automakers are required to submit results to the government of tests they conduct on a new model of vehicle, or new types of engine, regarding exhaust emissions and fuel economy, among other things.

If the government authorizes a particular model, each vehicle in the series is not required to undergo further tests when it is manufactured.

Authorization, a guarantee of safety of the vehicle and its components, is also vital for the mass production process, including parts.

Analysts said it will likely take several months for Hino Motors to be re-issued authorization for the eight models of vehicle, during which time production will be suspended.

In a related development, Hino Motors on March 29 lowered its earnings forecast for the year from April 2021 to this March, citing costs incurred for recalling vehicles equipped with the questionable engines.

The company slashed its net profit forecast for the period from 15 billion yen ($123 million) in the black that it had previously announced, projecting it would now be 54 billion yen in the red.

The eight models include Hino’s heavy-duty truck “Ranger” and its coach bus “S’elega” as well as Toyota’s bus “Coaster” and a model of bus called “Gala” manufactured by Isuzu Motors Ltd. Hino Motors supplied engines for the latter two models.

Hino Motors admitted it fabricated data of its four engines, which range in capacity from large to medium and small.

In one instance of testing for durability of equipment in line with exhaust emissions, the muffler was replaced during the screening process

Another time, Hino Motors employees tweaked a testing machine when conducting a test on an engine’s fuel economy to produce enhanced results.

Hino Motors has sold a total of 110,000 vehicles equipped with the questionable engines since 2017.

They include around 23,000 vehicles it sold in fiscal 2021, which is equivalent to almost 40 percent of all the units it sold in Japan that fiscal year.

Hino Motors has suspended shipping of vehicles with the questionable engines since March 4.

It remains unknown when it will be allowed to restart production.

The company made clear that some sort of action to deal with the suspension is in the works, such as transferring employees to other production activities. However, it said it will protect their employment.

Company officials explained that the falsification arose because the employees were under pressure to maintain a tight schedule to meet deadlines.

It also said that oversight for testing may have been lax because the section that handled engine development carried out the testing as well.

An investigative committee made up of external lawyers will pin down responsibility for the misconduct and propose measures to prevent a reoccurrence.

“We wish to apologize once again for the significant inconvenience that we have caused to our customers,” a company representative said after the transport ministry’s March 29 decision. “We take the (ministry’s) decision seriously and will respond to it in a sincere manner.”

(This article was written by Masanori Isobe and Naoyuki Fukuda.)