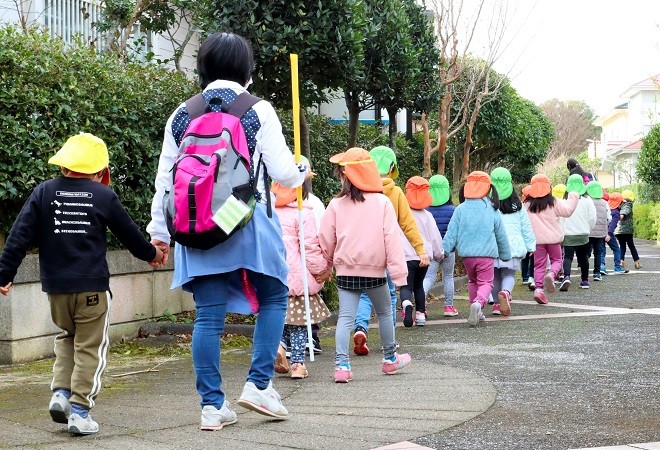 In an increasing and troubling trend, a Tokyo woman in her 30s was told by her 2-year-old son's nursery school that he had been forgotten and left behind while on an outing.

“Our workers returned to our day care center while your son was left in a park,” she reported being told one day last year by officials of the private, central government-authorized nursery school.

The nursery school officials explained that four staff members, including child care workers, took 22 children, aged between 2 and 5, earlier that day to a park. Once the playtime was over, they had the children form a line and counted them by the number of their caps.

After they returned to the day care center about 20 minutes or so later, they were contacted by a child care worker of another nursery school who had found the woman’s son. Only then did they notice that the boy had been left in the park, his mother was told.

The day care center officials explained that her son remained alone for about 10 minutes, although they could not tell exactly when he went missing.

“Ten minutes could have been enough time for my son to run out onto a road or be taken away by somebody,” the woman said. “It’s nothing like ‘only 10 minutes’ to me.”

The incident is among the frequent occurrences of nursery school children being left in parks and elsewhere during outings from their day care facilities, as child care workers return without realizing that the young ones are missing.

Officials have told The Asahi Shimbun the Tokyo metropolitan government alone received reports on 94 cases of children going temporarily missing while in the care of nursery schools, including those left behind, during the four years between fiscal 2017 and fiscal 2020.

The entire picture, however, remains murky because day care facilities are not required to notify the central government of similar cases. Few local governments are calling for reports to be made on similar incidents, either.

Some of the incidents involved children leaving the grounds of a day care center or being lost on the premises of one.

The Asahi Shimbun has learned of a case where nursery school workers remained unaware of a 3-year-old gone missing for more than an hour until the child walked home from a park and was taken into police custody.

“Children being left behind amount to serious incidents that could compromise their safety,” a metropolitan government official said. “But whether to report similar incidents to us depends on each day care facility. Some of the cases have been brought to our attention only after a government office was notified by parents.”

Starting in fiscal 2021, the following text was added to materials used in the metropolitan government’s training course for day care center officials: “Reports on incidents involving children left behind are rising sharply in number.”

The document calls on nursery school workers to count the number of children without fail every time the scene changes, such as when a party leaves the grounds of a day care center and when the party has arrived at its destination.

Management standards based on the Child and Child Care Support Law and other regulations state that child care facilities must notify local governments in the event of an accident.

The central government requires nursery schools to notify it, through the intermediary of local governments, of any serious accidents that involve death or an injury requiring 30 days or more to heal.

Cases of children being forgotten, however, are not covered by that notification requirement.

The Yokohama city government issued a notice calling for similar cases to be reported promptly to public administration offices and began gathering relevant information after a child was left unnoticed by an unauthorized day care center in 2011.

Yokohama officials said there were 42 cases of children being left behind or lost during the three years between fiscal 2018 and fiscal 2020.

The prefectural government of Hokkaido is also calling for reports to be made on cases of “missing” children, including those left behind. The reports, however, are used only for guidance and inspections, and the numbers and details of the corresponding cases were not available.

The governments of Kanagawa, Osaka, Aichi and Fukuoka prefectures, in the meantime, have not been calling for reports to be made on similar cases as long as they do not equate to the “serious accidents” that require the central government to be notified.

“Ensuring the safety of children is one of the most important things in day care,” said Yasuhiro Kozaki, a professor of early childhood care with Osaka Kyoiku University. “Children just shouldn’t be left unattended.”

Kozaki, who previously served as a child care worker himself, pointed out, however, that children are being left unattended for a reason.

“Japan has lower staffing standards for child care workers than other nations,” he said. “In addition, the workload of front-line staff is only growing, with filling out documents and dealing with children’s parents. There is high worker turnover and experienced personnel are hard to come by. These and other factors lie in the background.”

Kozaki continued: “Cases (of children left unnoticed) should be studied, and intensive preventive measures should be taken.”

A Hokkaido woman in her 40s also said her son was left in a park during an outing from his day care center about four years ago. He was 2 at the time.

A neighbor spotted her son, who was crying alone in a parking lot, and notified police. A child care worker noticed, immediately before arriving back at the nursery school, that he was missing, whereupon the worker returned and found the woman’s son still in the park with the neighbor, the mother reported being told.

The park was about a 30-minute walk for children from the day care center, and there was a busy road along the way.

The woman called on the nursery school and the local government to share the case with other day care centers to draw a lesson from it, only to learn two years later that the information had never been shared.

She said that, in the end, she took the case to a third-party panel for handling complaints, which had been set up by the nursery school. There, the case of her son being left in the park was finally shared with other day care centers.

“Public administration offices should not be covering up cases of children left unattended,” the woman said. “They should instead issue warnings against a repeat of similar incidents.”

Day care centers without play areas are growing in number in urban districts resulting from deregulation of nursery schools to cope with the plethora of children on waiting lists.

It is believed to be a contributing factor behind the frequent cases of children being left behind.

A study by Hoikuen o Kangaeru Oya no Kai (association of parents for discussing the issue of day care centers), a group organizing parents of nursery school children, showed an average of only 70.6 percent of day care centers in 100 major municipalities across Japan had play areas in fiscal 2021.

That number was down about 10 percentage points from 80.3 percent in fiscal 2015.

The study covered ordinance-designated major cities, the 23 wards of Tokyo, cities in western Tokyo and major municipalities in Chiba, Saitama and Kanagawa prefectures.

Children from different day care centers playing at the same time in the same park is a common sight these days in urban areas.

“I often feel really uneasy when children from different nursery schools happen to meet in a park,” said a twentysomething child care worker with a central government-authorized Tokyo day care center that has no play area.

A thirtysomething child care worker with another central government-authorized day care center in the Japanese capital said, “The staffing standards are so low that it is difficult for us to keep watch over children’s safety.”

The central government’s staffing standards say an authorized day care center should have one child care worker for every three children under the age of 1 and one for every six 1- or 2-year-olds, and there should be a minimum of two child care workers at all times.

“My workplace has more staff than mandated in the standards, but we are still short-staffed, and we routinely work overtime,” the employee complained.

“Serious incidents could occur as long as workers are unable to look after every single child,” said Aki Fukoin, head of the parents’ association.

(This article was written by Emi Hirai, Keiko Nannichi and Natsumi Nakai.)