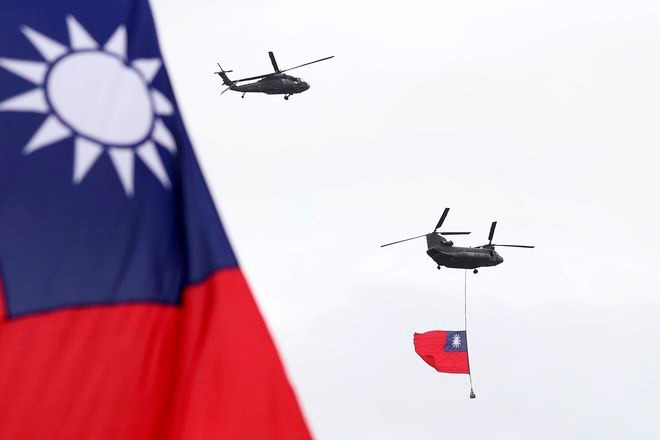 Helicopters fly over President Office with Taiwan National flag during the National Day celebrations in Taipei on Oct. 10, 2020. (AP Photo)

TAIPEI--Taiwan’s defense ministry has set up a working group to study the tactics of the war in Ukraine, including how the country has been able to hold out against Russia, and has been discussing this with the United States, its minister said on Thursday.

Taiwan, claimed by China as its own territory, has raised its alert level since the Russian invasion, wary of Beijing possibly making a similar move on the island, though it has reported no signs this is about to happen.

The possible impact of the war on China’s military thinking on Taiwan, and how China could attack the island, has been widely debated in official circles in Taipei.

Speaking to reporters on the sidelines of parliament, Defense Minister Chiu Kuo-cheng said they had had “contact” with foreign countries to talk about how the war was being fought and had set up their own working group to study it.

“It is not only discussed in exchange meetings between the United States and Taiwan, but also discussed with other countries that have regular contacts with Taiwan,” Chiu added, without giving details.

Taiwan’s team on Ukraine includes academics from the National Defense University, he said.

“However, we will not make remarks rashly, but through internal discussions which are important, to get results that are helpful for building armaments and preparing for war.”

While Taiwanese officials have seen many parallels in the Ukraine war and their own situation, including having their own giant neighbor with territorial ambitions, they have also pointed to major differences.

Taiwan has talked, for example, of the “natural barrier” of the Taiwan Strait which would make China putting troops on the ground much more difficult than Russia just crossing over its land border with Ukraine.

Taiwan also has a large and well-equipped air force and is developing its own formidable missile strike capability.

China has been stepping up its military pressure against Taiwan over the past two years or so.

Taiwan rejects China’s sovereignty claims and says only the island’s people can decide their future.