Aomori Nebuta Festival gets the green light after 2-year absence 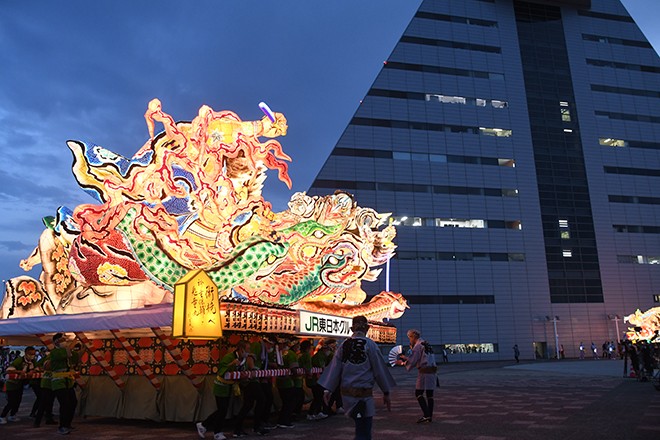 AOMORI--One of the three great festivals of the northeastern Tohoku region is expected to proceed this year, though scaled back.

The grand Aomori Nebuta Festival, with its massive paper lantern floats, has been canceled the last two years due to the novel coronavirus pandemic.

The executive committee, comprising the Aomori Tourism and Convention Association and other entities, announced the news.

“Holding the festival will bring economic benefits and invigorate local communities,” said Hidenori Nara, chair of the tourism association, who also serves as head of the executive committee. “We want to make this year the first year for revival.”

Depending on the COVID-19 situation, however, the annual summer festival could be switched to an alternative event like it was last year, the committee said.

“We will make the decision based on the prefectural government's guidelines for restrictions on (large-scale) events, in addition to seeing how festivals are held in other prefectures, but we want to somehow make it happen,” Nara said.

The festival will be held for six days from Aug. 2 to 7, as usual, with the towering “nebuta” lantern floats parading 3.1 kilometers through the city.

Usually, 22 groups participate in the festival to operate the floats, but only 15 of them this year said they will attend while seven have opted not to, according to the committee.

The festival was canceled in April 2020 for the first time since 1958, when it was changed to its current name.

It was called off again in June 2021, but an alternate event was held at the Aoi-Umi-Koen park in Aomori in August, during which floats completed by 16 groups were displayed.

Floats are usually all paraded at once across the venue, occasionally creating crowds of spectators. To prevent such crowds, each float will make its start at an intersection on Shinmachi-dori street.

Prior registration will be required for “haneto” performers to dance alongside the floats.

About 11,500 prepaid viewing seats will be set up along the streets based on guidelines set by the prefectural government.

The committee will consider canceling the festival and hosting an alternative event depending on the spread of infections in the prefecture.