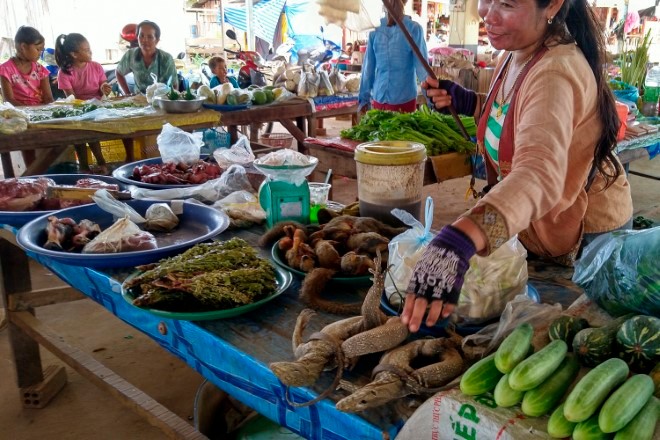 BANGKOK--A report by the World Wildlife Fund shows illegal purchases of wildlife online are growing in Myanmar in a threat both to public health and to endangered species.

The report released Friday found that enforcement of bans on such transactions has weakened amid political turmoil following a 2021 military takeover.

The number of such dealings rose 74 percent over a year earlier to 11,046, nearly all of them involving sales of live animals. For the 173 species traded, 54 are threatened with global extinction, the report said.

Researchers identified 639 Facebook accounts belonging to wildlife traders. The largest online trading group had more than 19,000 members and dozens of posts per week, it said.

The animals bought and sold included elephants, bears and gibbons, Tibetan antelope, critically endangered pangolins and an Asian giant tortoise. The most popular were various species of monkeys, often bought as pets.

Most of the animals advertised for sale were taken from the wild. They also included civets, which along with pangolins have been identified as potential vectors in the spread of diseases such as SARS and COVID-19.

“With Asia’s track record as a breeding ground for many recent zoonotic diseases, this sharp uptick in online trade of wildlife in Myanmar is extremely concerning,” he said.

The unregulated trade in wild species and resulting interactions between wild species and humans raise the risks of new and possibly vaccine-resistant mutations of illnesses such as the COVID-19 that could evolve undetected in non-human hosts into more dangerous variants of disease, experts say.

COVID-19 is one of many diseases traced back to animals. The killing and sale of what is known as bushmeat in Africa was thought to be a source for Ebola. Bird flu likely came from chickens at a market in Hong Kong in 1997. Measles is believed to have evolved from a virus that infected cattle.

“Illegal wildlife trade is a serious concern from the point of view of biodiversity preservation and conservation and its potential impact on health security,” said Mary Elizabeth G. Miranda, an expert on zoonotic diseases and illness and CEO of the Field Epidemiology Training Program Alumni Foundation in the Philippines.

Social media and other online platforms have joined a worldwide effort to crack down on the thriving trade in birds, reptiles, mammals and animal parts. In Myanmar, much of the trade in wildlife is through Facebook, which as a member of the Coalition to End Wildlife Trafficking online has taken action to block or remove accounts of people engaged in such transactions.

But as is true elsewhere, new accounts often pop up just as soon as old ones are shut down, hindering enforcement, the report noted. Easy online access to the animals also is driving up demand, worsening the problem.

Highlighting the lack of enforcement, people in the illegal wildlife trade in Myanmar often use rudimentary methods of moving the animals and animal products around--with buses being the usual form of transport.

The study by WWF in Myanmar focused on trade online of animals and other creatures inside the country, though there were some imports from neighboring Thailand, mainly of birds such as hornbills and salmon crested cockatoos, and of crocodiles, to India.

Some deals might involve animals or parts being sent into China, it said.

The conservation group said it plans future studies to better understand Myanmar’s role in the global trade in endangered species.