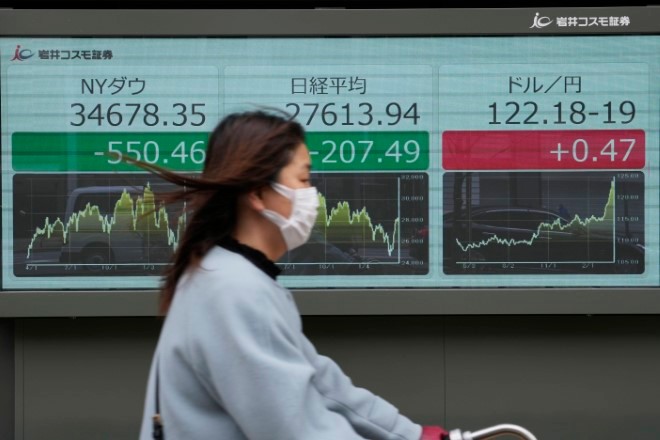 Asian shares were mostly lower Friday as a resurgence of Russian attacks dashed hopes for any quick end to the war in Ukraine.

The retreat followed a broad decline on Wall Street, which closed out its worst quarter since the pandemic broke out two years ago.

A closely watched quarterly gauge of business sector sentiment in Japan called the “tankan,” carried out by the Bank of Japan, found the benchmark indicator for large manufacturers dropped for the first time in seven quarters, losing three points from a survey in December to 14 points from 17 points.

The war in Ukraine, coming on top of supply chain disruptions at top manufacturers caused by COVID-19 restrictions and growing worries about inflation, especially soaring energy costs, are clouding the outlook for already fragile growth in the world’s third largest economy.

The war is the biggest single factor weighing on markets, analysts say. Ukrainian President Volodymyr Zelenskyy expressed pessimism about Russian intentions and said in his nightly video address to the nation that he expected the Russian offensive would continue for some time.

“As we head into the weekend break, optimism for a ceasefire in the geopolitical conflict continues to fade overnight,” said Yeap Jun Rong, market strategist at IG in Singapore.

Shares in electronics and energy giant Toshiba Corp. jumped 6.7 percent on news that Bain Capital might make an offer to acquire the company and take it private. Toshiba said it was not involved in any such talks.

Rising COVID cases in China are adding to the worries of a regional slowdown. The lockdown in Shanghai entered its second phase of extended restrictions, while restrictions were lifted in hard hit Jilin.

On Wall Street, a 3.6 percent gain for March failed to offset a dismal January and February that left U.S. indexes lower for the year to date.

Oil prices fell as President Joe Biden ordered the release of up to 1 million barrels of oil per day from the nation’s strategic petroleum reserve. The move to pump more oil into the market is part of an effort to control energy prices, which are up nearly 40 percent globally this year.

An overnight pullback slightly trimmed what have been soaring oil prices amid Russia’s invasion of Ukraine. The conflict has elevated concerns that tightened supplies will only worsen persistently rising inflation that threatens businesses and consumers globally.

An inflation gauge that is closely monitored by the U.S. Federal Reserve jumped 6.4 percent in February compared with a year ago, marking the largest year-over-year rise since January 1982.

Energy prices have been a key factor in pushing inflation higher and Biden’s plan to release more oil into the system comes as little relief is expected from the oil cartel OPEC. The cartel and its allied oil producers including Russia are sticking to a modest increase in the amount of crude they pump to the world, a step that supports higher prices.

Technology and communications stocks were among the biggest weights on the market. Chipmaker Intel fell 3.6 percent, while Facebook parent Meta Platforms slid 2.4 percent.

But in Asia early Friday the yield on the 10-year Treasury rebounded to 2.39 percent.

Higher prices for everything from energy to food are a key concern of central banks, which are moving to raise interest rates to help temper the impact.

Investors received a lukewarm update on the job market on Thursday. More Americans applied for unemployment benefits last week, but layoffs remain at historic lows. Wall Street will get a fuller report on Friday when the Labor Department releases employment data for March.