Japan’s ODA to China ends after 40 years and 3.6 trillion yen 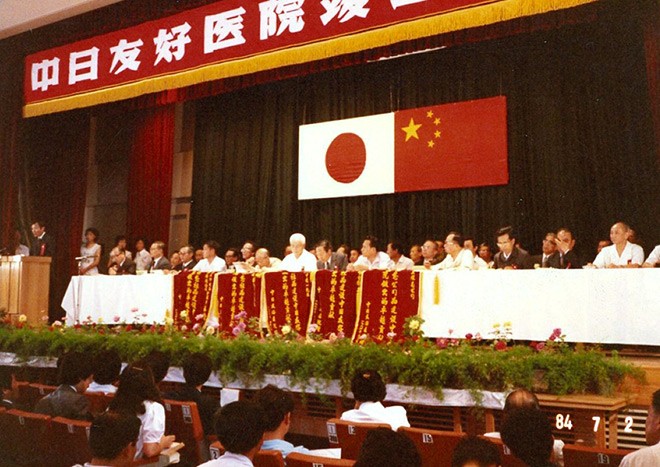 The opening ceremony of the China-Japan Friendship Hospital in Beijing, which was built through Japan’s ODA, is held in July 1984. (Provided by the Japan International Cooperation Agency)

Japan’s official development assistance (ODA) to China ended at the end of March after more than 40 years, bringing down the curtain on 3.6 trillion yen ($29 billion) of aid over the four decades.

While Japanese ODA to China has supported the nation’s growth and strengthened the relationship between the two countries, some questioned the need over the years to continue the assistance.

Others criticized the lack of transparency over the aid provided by Japan.

However viewed, the assistance had gradually wound down over the years, as relations between the two countries cooled and the Chinese economy boomed.

Japan’s ODA to China started in 1979. Some said that this was in response to Beijing’s declaration to abandon demands for wartime compensation under the 1972 bilateral joint communique.

According to the Japan International Cooperation Agency (JICA), Japan’s breakdown of ODA to China is nearly 160 billion yen of grant aid, provision of funds with no obligation of repayment, around 3.3 trillion yen in loans, and about 190 billion yen of technical cooperation.

In the early days of Japan’s ODA to China, the assistance was mostly provided to support infrastructure construction such as ports or power generation facilities.

Then, over time, it shifted its focus to projects such as building subway networks or tackling poverty or environmental issues. Japan also dispatched Japanese language teachers to China as part of its “technical cooperation.”

However, during these periods, China achieved rapid economic growth, with its defense budgets also increasing annually. Considering this, the Japanese government concluded at some point that its ODA to China had run its course.

It stopped launching new programs of grant aid to China in 2006, as well as those of yen loans to the country in 2007, respectively. It also ended programs of technical cooperation to China at the end of fiscal 2021.

Chinese who work at the sites for which Japan provided ODA are thankful for the assistance. The China Rehabilitation Research Center (CRRC) in Beijing, which opened in 1986, is the country’s first comprehensive rehabilitation clinical research facility and the result of a 3.38 billion yen grant provided by Japan.

Liu Huilin, 56, a physiotherapist at CRRC, praised the exemplary nature of the center by citing its use of bright colors for its floor to uplift patients’ mood, which is emulated by other similar facilities in China.

However, the fruits of Japan’s ODA such as this center are not well-known in China.

Kazuyuki Suwa, professor of international relations at the University of Shizuoka, said that when he was involved in ODA programs in China as a diplomat, someone removed a sign from a building denoting that it was built through Japanese ODA, suggesting that Japanese aid was not always positively viewed there.

In addition, although one of the aims of Japan’s ODA to developing countries has been to support their democratization, China didn’t follow a path that Japan had hoped it would.

The Chinese government crushed student protests at the Tiananmen Square in 1989. More recently, it is showing even more defiance toward criticism from the West about human rights and freedom of speech issues in the country by saying, “Democracy takes different forms.”

Suwa said that how Japan and China will build a constructive relationship after the end of Japanese ODA, which was the symbol of cooperation between the two countries, is an important issue for which the road ahead is unclear.