New employees at the Toba Aquarium in Toba, Mie Prefecture, dive into a large tank and receive a letter of appointment at a ceremony that welcomes them as part of the workforce on March 31. (Takeshi Iwashita) 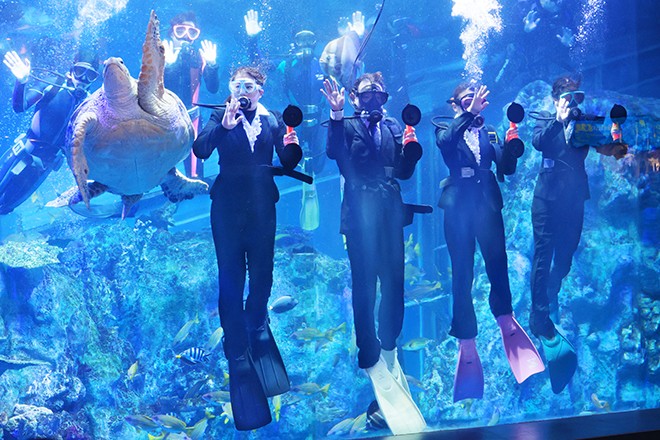 New employees at the Toba Aquarium in Toba, Mie Prefecture, in diving suits wave to visitors alongside senior employees and water creatures from inside a large tank during a ceremony to welcome them into the workforce on March 31. (Takeshi Iwashita)

As the remaining pre-emergency measures were lifted in late March, many firms invited large crowds to in-person ceremonies for the first time since the COVID-19 pandemic started in early 2020.

But while most of the new hires, dressed in the ubiquitous dark “recruit suits,” sat and listened to official speeches from company brass, a few lucky ones at smaller gatherings received an anything-but-ordinary reception from their new employers.

At the Toba Aquarium in Toba, Mie Prefecture, on March 31, four new employees dove into a large glass tank.

They wore weighted business suits on top of their diving suits and went underwater to receive a letter of appointment as 3,000 aquatic creatures, including a green turtle and humphead wrasse, swam around them.

Many aquarium visitors watched the ceremony. And the new hires quickly set to work on their first tasks.

A senior employee handed them sponges, and they cleaned the glass of the tank from the inside.

Keisuke Sugiwaka, 22, gave a speech from under water.

“It has been my dream to become a staff member as an aquarium animal breeder since I was an elementary school student,” he said.

Referencing that the COVID-19 pandemic has yet to end, he added, “I am so happy to be on a center stage like this on the first day of work.”

PAJAMAS ARE THE NEW BLACK

In Machida, western Tokyo, eight fresh recruits at Futonto Inc., a bedclothing sales company known for its made-to-order pillows, changed into light-yellow pajamas to become an official part of the workforce on April 1.

After posing for a group photo in business suits, the eight picked up the in-house products and received a letter of appointment from Kiyokazu Saito, the company’s president.

“I will value a smile and make our customers feel alive,” said Reika Kobayashi, 22, in a speech.

The idea of having a ceremony in a slumber party style came from the new hires themselves.

Citing that the company is a relatively young entrepreneurial firm established 11 years ago, Saito proposed that the new hires plan their entrance ceremony on their own.

They have been hammering out the details during online meetings since February, Saito said.

“You are having a one-of-a-kind entrance ceremony, unlike any other in the world,” Saito said to the new hires during the event.

“I want you to turn (the experience) into confidence and thrive at the company, even though you will face many difficulties in adult life.”

In the afternoon, the new employees--still in pajamas--laid on the mattresses and chatted about their dreams and goals to try out the company’s products firsthand.

They also interacted with senior employees who made a customized pillow for each of them.

LARGE CROWDS ARE BACK

Major firms have brought back their traditional large ceremonies to welcome new recruits.

Meiji Yasuda Life Insurance Co. welcomed 300 or so fresh recruits at its headquarters in Tokyo on April 1.

Participants took a COVID-19 antigen test before the ceremony.

It was the first time in three years the company had all its new recruits together at once. In the past two years, the company held the event in small groups.

The company said it will also hold a training program for new hires in person for the first time in three years.

Hideki Nagashima, the company’s president, encouraged the new hires to “feel safe and take (your) first step as an adult and not to overly worry about the (pandemic).”

For some companies, it was an opportunity for a fresh start.

Mizuho Financial Group Inc., which has been plagued with computer system glitches, held a welcome ceremony for new hires for the first time in three years.

About 600 new employees at the group’s affiliated businesses attended the ceremony.

President Masahiro Kihara, who stepped into the role in February, apologized to the new employees “for causing you major concerns because of the system failures.”

He then encouraged them to “thrive from their failures and not let anything discourage you.”