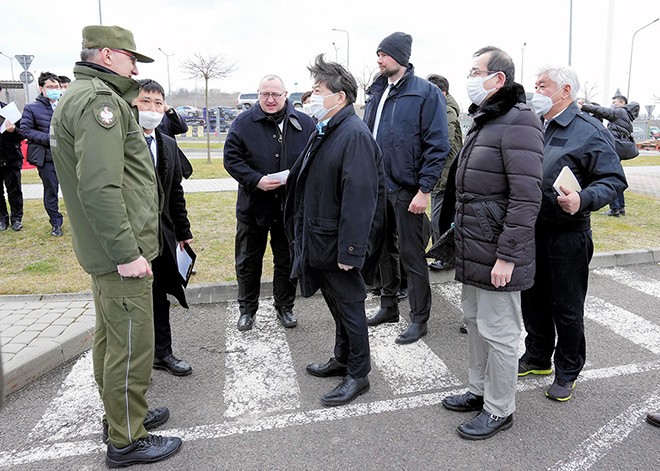 Foreign Minister Yoshimasa Hayashi is briefed by Polish officers about the situation in the town of Medyka near the border with Ukraine on April 3. (Provided by the Foreign Ministry)

“After seeing firsthand the situation on the front line, I renewed my resolve that Japan should offer its utmost assistance to help Ukrainian refugees return to the lives they had before the invasion as soon as possible,” he told reporters.

The Japanese foreign minister also exchanged views with officials of international organizations in Rzeszow, a town near Medyka.

The border officers told him that Medyka was flooded with evacuees, totaling thousands to tens of thousands on some days.

But the number of evacuees has declined in recent days, and some were even returning to Ukraine, they added.

Japan’s top diplomat also inspected how immigration checks were conducted in Medyka, as well as private groups’ efforts to offer meals to the evacuees.

Hayashi is scheduled to meet with his Polish counterpart, Zbigniew Rau, on April 4.

“I want to exchange views based on what we have seen and heard on the front line and make the best use of the input when providing Japan’s assistance to Ukrainian evacuees,” Hayashi said about the meeting.

He is also scheduled to make a courtesy call on Polish Prime Minister Mateusz Morawiecki and Polish President Andrzej Duda before he returns to Japan on a government plane.

The government plans to bring some Ukrainians aboard the plane if they wish to evacuate in Japan.