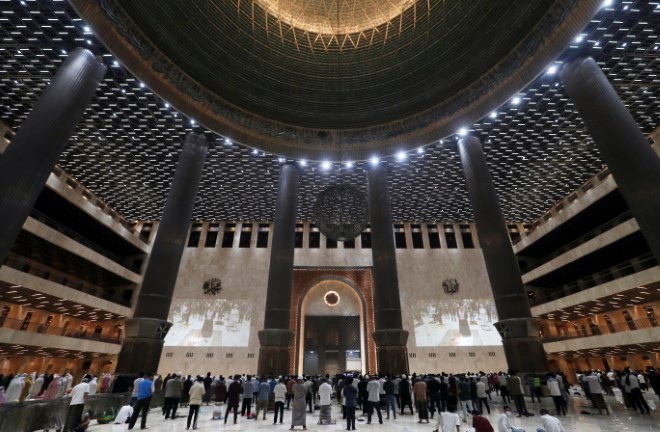 Indonesian Muslims pray spaced apart as they practice social distancing to curb the spread of the new coronavirus during an evening prayer called ‘tarawih’ marking the first eve of the holy fasting month of Ramadan at Istiqlal Mosque in Jakarta, Indonesia. on April 12, 2021. (AP Photo)

JAKARTA--The Muslim holy month of Ramadan was set to begin Saturday in Indonesia and most of the Middle East, though many in the Southeast Asian nation and elsewhere were not planning to start observing the month of dawn-to-dusk fasting, prayer and religious devotion until Sunday.

Indonesia’s second-largest Islamic group, Muhammadiyah, which counts more than 60 million members, said that according to its astronomical calculations Ramadan begins Saturday. But the country’s religious affairs minister had announced Friday that Ramadan would start on Sunday, after Islamic astronomers in the country failed to sight the new moon.

It is not the first time the Muhammadiyah has offered a differing opinion on the matter, but most Indonesians--Muslims comprise nearly 90 percent of the country’s 270 million people--are expected to follow the government’s official date.

Either way, the world’s most populous Muslim nation was set to mark the most “normal” holy month since the start of the pandemic in 2020, as COVID-19 cases continued to decline.

President Joko Widodo announced last week that the government would ease COVID-19-related restrictions for the first time in two years. Indonesian Muslims can hold mass prayers during Ramadan this year and join their families back in their villages for the Eid celebration in early May to mark the end of the fasting month.

“This year, Muslims can hold congregational (nighttime prayers) and gather to pray in mosques,” Widodo said in televised remarks. “People who also want to travel to visit relatives in the traditional Eid homecoming are welcome to.”

The country reported just 2,930 cases on Friday, representing more than a 90 percent drop from mid-February, when an omicron-driven surge peaked at around 64,700 daily cases. Some 75 percent of Indonesia’s eligible population of 208.2 million people have been fully vaccinated as of Friday.

Nighttime Ramadan prayers will return to normal this year. Worshippers in Indonesian mosques are no longer required to maintain physical distancing introduced during the pandemic, meaning more can attend the mosque. But certain rules remain, such as mandatory mask wearing, and worshippers are required to bring their own prayer mats.

Religious lectures or sermons can resume along with activities at mosques after prayers. The government also will allow people to hold “iftar” gatherings during Ramadan in restaurants, malls and cafes. Iftar occurs at sunset, when Muslims break their fast and it is usually a time people have dinner together with friends and family before nighttime prayers.

Authorities also allowed the return of Ramadan-related festivals after a two-year absence due to the pandemic, including a torchlight parade to welcome the Islamic fasting month.

“I am so excited to see the tradition of Ramadan returning entirely,” said Rahardian Irsan, a resident in Indonesia’s capital, Jakarta. “The longing for a normal Ramadan has finally been relieved today, although the pandemic has not yet ended."

Authorities shuttered all mosques in 2020 when Islam’s holiest period coincided with the start of the coronavirus pandemic, and clerics issued a fatwa, or edict, urging Muslims to pray at home over the holy month rather than congregate in crowded spaces and risk spreading the virus.

There were glimmers that Ramadan last year could feel less restricted, as mosques had reopened with strict health protocols and new rules in place, and as vaccine rollouts continued, but festivities that could attract crowds remained banned.