Calligraphers write hopes for peace in Ukraine across 35 temples

Calligrapher Ringetsu writes a line from Japan’s ancient Constitution at Rakuunji temple in Nagoya on April 3 to pray for peace in Ukraine. (Kazuhiro Nagashima) 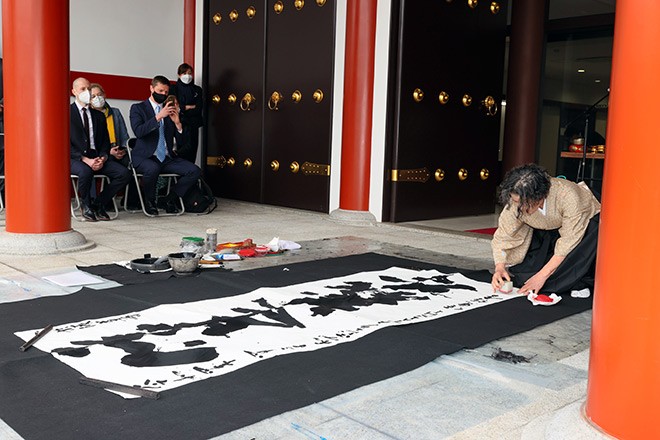 Calligrapher Yoshie Koshihara wrote one line she chose from Article 9 of Japan’s oldest written law on a sheet of “washi” paper at Sensoji temple in Tokyo’s Taito Ward on April 3.

After completing the work on washi measuring 2.5 meters long and 1 meter wide, Koshihara said the four kanji characters written with powerful brush strokes in classical Chinese mean believing in something is the essence of being morally right.

“I hope we can cooperate and have faith in each other by believing in what we can do and hoping peace will be restored,” Koshihara said.

Calligraphers wrote messages from the nation’s ancient Constitution at 35 temples across Japan to pray for an early end to the ongoing crisis in Ukraine.

With light brush strokes, calligrapher Ringetsu wrote another line from the Constitution that stressed “wa” (harmony) is the greatest of virtues, on washi measuring about 70 centimeters long and 140 cm wide at Rakuunji temple in Nagoya on the same day.

“The current global situation made me realize the importance of peace once again,” said Ringetsu, whose real name is Mamiko Kobayashi. “I think other countries can also share Japan’s spirit of cherishing harmony, which I believe will bring peace to the world.”

The event was organized by Wa Project Taishi, a Nagoya-based nonprofit organization that uses calligraphy to promote the spirit of cherishing wa, as preached by Prince Shotoku (574-622) in the Seventeen-Article Constitution.

Three first secretaries from the Ukrainian Embassy in Tokyo and staff from the German and Estonian embassies were invited to the event at Sensoji temple. Sergiy Korsunsky, the Ukrainian ambassador to Japan, was also scheduled to attend but canceled due to poor health, according to the organizer.

Since 2018, Wa Project Taishi has hosted similar events on April 3, when the ancient Constitution is believed to have been enacted.

(This article was written by Yoshinori Doi and Yuka Honda.)