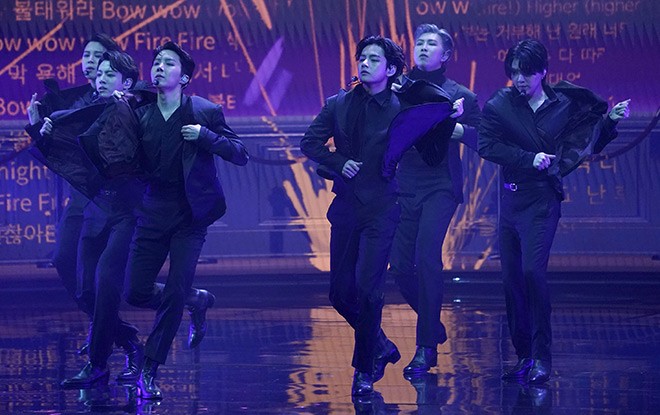 SEOUL--South Korean media expressed disappointment on April 4 after BTS failed to win a Grammy, blaming the awards' "traditional" nature, but praised the pop group for being nominated for the second consecutive year.

South Korean media outlets reported it as breaking news when “Kiss Me More” by Doja Cat Featuring SZA won in the category at the awards ceremony in Las Vegas late in the afternoon of April 3.

“BTS failed to win a Grammy for the second consecutive year,” South Korea’s Yonhap News Agency said in its coverage of the news.

The South Korean TV news broadcasting station YTN said the K-pop superstar group failed to collect the prize despite fans’ high expectations apparently because of the awards’ traditional nature, which places a higher value on the quality of the music than an artist's popularity.

The broadcaster noted it still carries significance that the exclusive awards institution nominated a BTS’ single like they did last year, when the group’s other mega-hit “Dynamite” received a nomination.

YTN praised the artists' achievements, saying no Asian pop singers have ever won a Grammy, the highest honor in pop music.

The digital version of Dong-A Ilbo, South Korea’s major newspaper, also gave BTS credit for “marking a new chapter in the history of K-pop” by being nominated two years in a row.

“It again captivated many people,” the newspaper said of the group’s performance at the awards ceremony. “The members, who performed on the stage wearing tight-fitting black jackets, elevated BTS’ status even higher.”

A 41-year-old reporter of Munhwa Ilbo, another South Korean newspaper, describes herself as a big fan of the group.

“I had high hopes for them to win a Grammy, so I was really disappointed,” she said. “Over the past year, BTS has brought great joy not only to the Army (their fans) but also other music fans around the world by staying active despite the COVID-19 pandemic. It doesn’t matter to fans whether the group wins a prize or not.”