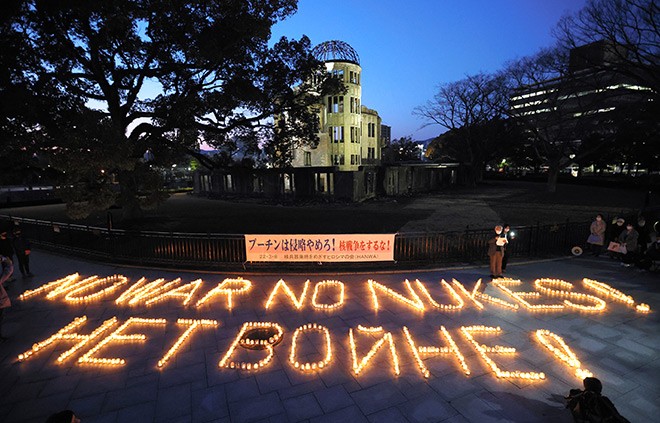 Candles are lit to send messages for peace and the abolishment of nuclear weapons in front of the Atomic Bomb Dome in Hiroshima on March 8 to protest Russia’s invasion of Ukraine. (Asahi Shimbun file photo)

HIROSHIMA--The Hiroshima prefectural government announced on April 5 the establishment of an international nongovernmental organization called "Global Alliance--Sustainable Peace and Prosperity for All" that will seek the abolishment of nuclear weapons by 2045.

That year will mark the 100th anniversary of the atomic bomb attacks of Hiroshima and Nagasaki at the end of World War II.

The new NGO will include as its initial members a total of 29 organizations from 13 countries, including Western nations, South Korea and India, that are tackling issues such as the environment and human rights, along with nuclear weapons.

From Japan, an anti-nuclear weapons group in Hiroshima and the Nagasaki prefectural government, among others, have joined the global alliance.

The NGO will urge that “the elimination of nuclear weapons” be included in the next Sustainable Development Goals to be adopted by the United Nations for the period after 2030.

The founding statement of the global alliance says, “Nuclear war--even a small one with limited nuclear weapons--would cause catastrophic, transgenerational consequences rendering most or all of the U.N.’s Sustainable Development Goals unachievable.”