Sanctions on Russia put the brakes on used cars exports 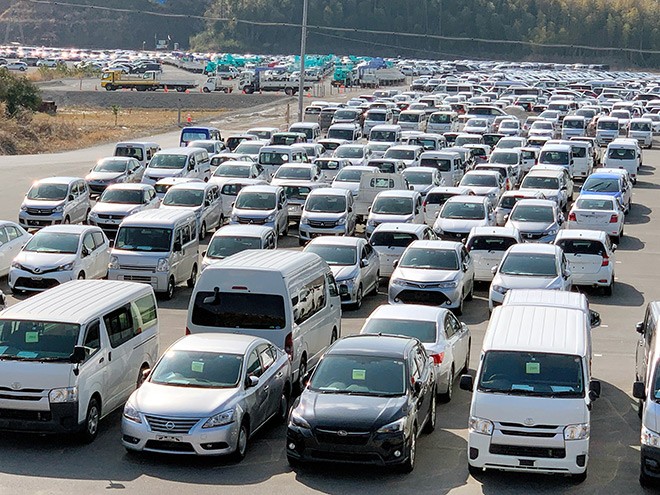 Used cars to be exported overseas are parked in Kisarazu, Chiba Prefecture, on March 24. (Junichi Kamiyama)

The invasion of Ukraine and the economic sanctions that quickly followed have caused Japan’s exports of used cars to Russia to take a steep plunge.

Russia was Japan’s largest used car market before the war started, and the sudden decline in used vehicle exports is putting downward pressure on prices in the domestic Japanese market, where they had otherwise been rising since the onset of the pandemic.

USS, a large auctioneer of used cars based in Aichi Prefecture, said on April 5 that the average winning bid had dropped to 911,000 yen ($7,300) in March. That is sharply lower than the record 1.006 million yen the company saw in February.

The drop in exports to Russia has flooded the Japanese market with used cars, giving domestic buyers a bit of a reprieve by bringing down recent sky-high prices.

Yamagin Corp., a Tokyo-based exporter of used cars, used to export 200 to 300 vehicles a month to Russia. But after the invasion began, its March exports dropped by 90 percent from a year earlier.

The company said even if it could secure ships to transport cars to Russia, the sharp devaluation of the ruble has discouraged Russian importers from buying vehicles.

They are unable to profit from them because the prices they have to pay to Japanese exporters are now exorbitant with the value of ruble being shattered.

Sales of used Japanese cars had been growing in the country on the back of their reputation as reliable vehicles. They accounted for 30 to 40 percent of the used car market in Russia.

Be Forward Co., another Tokyo-based used car exporter, said Russian importers were supposed to have made payments for 200 transactions in yen by late March, but had not done so. Those transactions total around 100 million yen.

Having increased its salespeople there, the company was planning to export more cars to Russia, as it saw the country as a promising market.

“We will now have to try to sell more cars to other markets, including Africa,” a company official said.

According to Finance Ministry statistics, Japan exported 1,026,098 used cars in 2021 worth about 619.9 billion yen in transactions.

The largest portion of those vehicles, at 15 percent, went to Russia. That accounted for 153,271 cars worth 98.7 billion yen in transactions.

In the Japanese market, prices for used cars had been rising since the onset of the COVID-19 pandemic in spring 2020. The slowdown of new car production caused by the shortage of semiconductors and other problems led to a reduction of the supply of vehicles on the used car market.

But now their prices on the Japanese market are declining.

“Fewer companies now are buying used cars to export to Russia, which means their price in Japan will drop further,” said one manager of a used car exporter.

By contrast, some say that trend will reverse in Japan down the road.

“If you look at the long-term prospect, prices of used cars will rise,” one economist said.

Some experts point out that many materials used to manufacture cars come from Russia and that if securing them becomes difficult, new cars could wind up in even shorter supply in Japan.