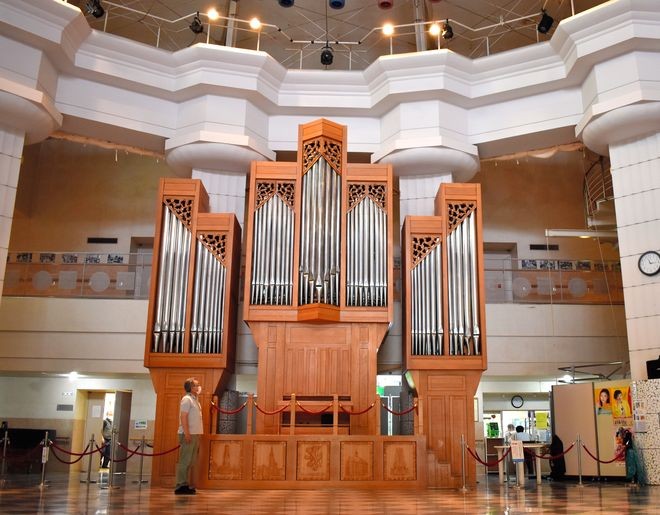 The instrument will be provided to a Vietnamese cathedral for free.

Chie Seo, 62, an organist in Itami, described the instrument’s pending relocation as “regrettable.”

“I have been proposing ways to continue using the organ for local citizens,” Seo said. “My only consolation is that it will be set up at a cathedral to dedicate music to God and fulfill its original purpose.”

Itami city installed the instrument in the municipality-run Sun City Hall exchange center for elderly citizens at a cost of 70 million yen ($560,000) three decades ago.

The city government started seeking a new owner two years earlier, but there being no takers pushed back the hall’s overhaul plan by a year.

It has yet to be determined how the church will collect the funds to cover relocating and maintaining the equipment.

Itami city initiated a campaign in June 2020 to find those in need of the instrument via social media, such as posting messages that it would like to “donate a large pipe organ.”

The organ was commissioned by Itami city, a sister city of Hasselt in Belgium. A Belgian maker specially designed the equipment, allowing it to fit the hall’s arrangement and be suited to Japan’s humid climate.

However, its maintenance and repair costs were too high considering the limited budget procured for senior citizens’ well-being programs, according to the municipality’s section for welfare affairs for elderly and other residents, which is responsible for the device. Thus, it was decided to relinquish the instrument.

Those in the music industry have lambasted the city’s treatment of the instrument, as the municipality seemingly deemed it as something troublesome during an organ contribution drive.

Under the initial plan, Itami city was expected to part with the organ in fiscal 2020 to allow for the hall’s renovation work from fiscal 2021.

No one wanted the organ, though, because of the two conditions attached to taking the organ--taking full advantage of it as a music instrument and bearing all the related costs. Some in the municipality’s assembly suggested it be “scrapped and discarded by the city” unless a recipient emerged by the end of fiscal 2021 in March.

Fate stepped in when Chikara Maruyama, 75, a “barrier-free” industrial designer in Kumamoto, contacted the city.

Maruyama, who has constructed and repaired pipe organs, learned about the Itami case by accident from an acquaintance. He decided the equipment “should not be disposed of” after viewing it in August last year.

He emailed 100 establishments, including churches, but none of them took up his offer. Maruyama thus relied on Google Maps to spot relatively large churches outside Japan that could have the organ installed on their grounds.

Vietnam was chosen as a target in part because Catholic churches are scattered throughout the former French colony.

Hearing that a priest regularly comes to a church in Kumamoto to provide mass in Vietnamese, Maruyama became acquainted with Pham Hong Trinh, 53, an assistant parish priest at Oita Catholic Church in Oita.

Pham and Maruyama went to Itami and listened to the musical instrument being played. Recalling the visit, Pham said he has “never seen such an impressive pipe organ.”

With Pham's help, St. Joseph’s Cathedral in Hanoi, showed up to accept the equipment. As the establishment founded in 1886 has 3,000 worshippers, they found that an organ is essential for their weekly mass.

The organ could also be used in concerts as part of cultural exchanges with other nations given the cathedral is in the Vietnamese capital.

The organ’s free transfer to the cathedral was officially approved by Itami city’s assembly in March.

The cathedral operator is expected to invest at least 20 million yen to introduce the instrument. Pham has contacted its creator, Guido Schumacher, to possibly have him help in the organ’s relocation and repairs.

The instrument must be moved out of Sun City Hall by the end of June.

“We are now desperately working to solicit contributions,” said Pham. “We may ask for help from other churches in Hanoi.”

Maruyama said people should imagine what would have happened if no one had shown up to accept the organ.

“Though nothing changes in my criticizing this, it was still inappropriate that the elderly citizens’ section was in charge of the organ for so long,” Maruyama said. “The art and culture department being in charge would have changed so much.”