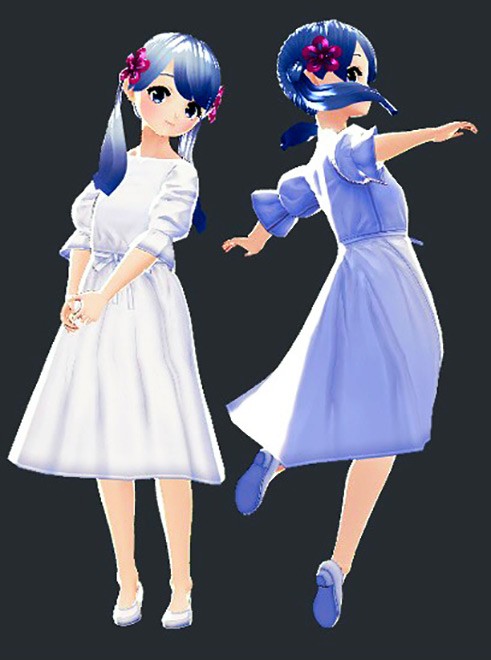 This 3-D model of the character Tsukuyomi-chan, which is digital artwork shared by the artist online as free material anyone can use, was put up for sale illicitly on an NFT marketplace. (Provided by Rei Yumesaki)

Artist Rei Yumesaki learned in late November through one of her fans that her digital art was put up for sale on a U.S.-based website without her permission.

Yumesaki had created a 3-D model of a cute anime-like character she calls Tsukuyomi-chan. She has been sharing it with the public online as free material that anyone can use for their own purposes--so long as they follow the terms of use.

But the character was put up for sale without copyright credit, breaching those terms, and was disguised in a way that no one would know it was material licensed for free use.

“I provided my work free of charge on the internet to help other people, but I am sad to see that my works were used fraudulently,” Yumesaki said.

She is one of a growing number of artists this is happening to.

A lack of safeguards and screening procedures on some marketplaces for digital art has contributed to the increase in digital art scams, raising copyright concerns for artists like Yumesaki who get ripped off when their creations are sold behind their backs.

It is also creating a buyer-beware atmosphere for would-be customers who may find it difficult to get their money back after learning they effectively purchased a stolen work.

The website Yumesaki’s character was listed on is called OpenSea, one of the largest NFT marketplaces in the world.

An NFT, or non-fungible token, is a unique digital identifier that cannot be copied. It acts as a sort of proof-of-ownership certificate for digital artworks or similar intangible assets.

NFTs are extremely difficult to fabricate or duplicate because they are stored on a blockchain, which is a digital cryptographic ledger.

They make it possible for the possessor to effectively own a digital asset, including anything from photos, videos and short animated clips to music, artwork, items in video games and more.

NFT certificates are traded on websites called NFT marketplaces, such as OpenSea--sometimes for staggering amounts of money.

A work of digital art created by an artist from the United States was sold through such an online market for about $69.3 million in March 2021, which helped fuel the boom in online NFT auctions.

But as online marketplaces for digital artwork grow at a rapid clip, so do the number of forgeries being found and traded on them.

According to OpenSea’s terms, it prohibits violating the intellectual property of other people and sales of items obtained illicitly.

But still, items can be put up for sale without first going through screening, so someone who found Yumesaki’s works online could have easily listed them on the marketplace.

Yumesaki complained about the copyright violation to the website operator, and soon her work was taken down from the site.

“Please be alert to whether NFT artworks are stolen ones when you buy them,” Yumesaki said.

A company employee who resides in Gifu Prefecture recently learned this lesson the hard way after he purchased an NFT that turned out to be fraudulent. He bought an NFT for artwork listed on OpenSea at nearly 3,000 yen in early December 2021.

But a few days later, the item he bought suddenly disappeared from the website.

When the man looked into the matter, he found the original creator was warning on Twitter that the work had been “put on sale without permission.”

The man has messaged the website operator about compensation, but he has not received any replies.

According to Kentaro Okamoto, a lawyer who specializes in digital rights issues, buyers of NFT artworks that were put up for sale without permission could seek damages from sellers in some cases.

“But some buyers would be forced to refrain from complaining because it would take a tremendous effort for them to initiate judicial proceedings,” he said.

The lawyer also said that many marketplaces set their terms of use to shield the website owners from bearing any responsibility for such problems or having to pay compensation.

Several domestic IT companies that have launched NFT marketplaces have introduced systems to prevent illicit sales.

An NFT marketplace established in April last year called “nanakusa” adopted a system for registering artists who can put their works up for sale.

The website operator conducts online interviews with artists to judge their qualifications and prevent entries by illicit sellers.

About 600 people have applied for the registration so far and about 190 of them have already been accepted.

The website operator confirms artists’ identities and their artistic backgrounds before they can sell their works.

Okamoto said the system is necessary for detecting attempts at illicit sales.

“It is important to create markets where sellers and buyers can trade safely to make the NFT market grow healthily,” he said.

(This article was written by Yasuyuki Onaya and Yoshikatsu Nakajima.)