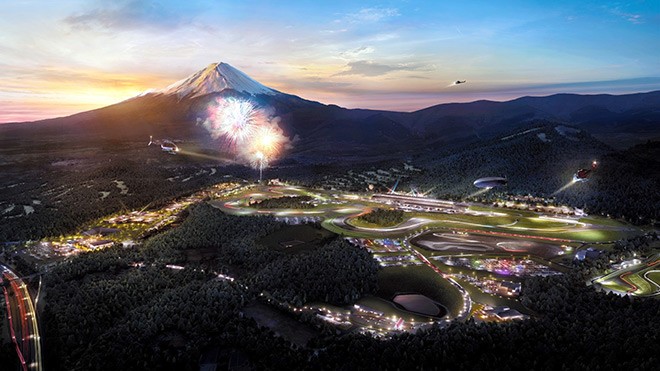 An artist’s rendering of Fuji Motorsports Forest, a complex housing a hotel, a museum and restaurants, at the foot of Mount Fuji (Provided by Toyota Motor Corp.)

Operators of a massive complex housing a hotel, a museum and racing team garages planned at the foot of Mount Fuji hope to have visitors pushing the pedal to the metal in a rush to arrive.

“We are aiming to make motorsports much more attractive and sustainable by offering a variety of experiences (at the complex),” said Koji Sato, an operating officer of Toyota who oversees the automaker’s motorsports business, at a news conference.

Towa Real Estate will be mainly in charge of developing the new complex, which will span about 250 hectares, including the roughly 225-hectare raceway.

Among the complex’s facilities, the Fuji Speedway Hotel will be the first to open. The hotel will start its operations this autumn with 120 guest rooms, which offer a panoramic view of the nearby circuit and Mount Fuji.

The Fuji Motorsports Museum, which will showcase about 40 racing cars, will also open around the same time.

Other attractions are scheduled to open in 2023 or later. They include an area for professional racing team garages, restaurants offering dishes made with locally grown ingredients, and spas.

The companies are hoping that the complex will draw about a million visitors annually.

They will also hold various events, including special tours of the garages, at the complex to entice visitors to drop by even when no races are scheduled at the speedway.