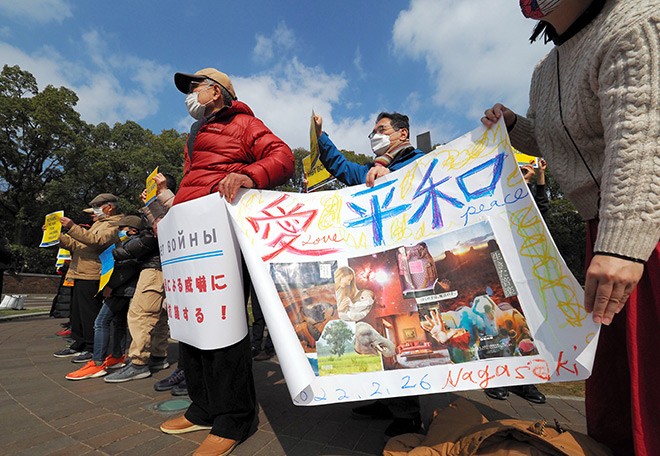 NAGASAKI--Organizations here will form a new body to call on governments around the world to become a party to the Treaty on the Prohibition of Nuclear Weapons (TPNW).

The organizations, including groups for victims of the 1945 atomic bomb, are aiming to launch the new organization in May.

The recent debate on the idea of “nuclear sharing” drove the organizations to form the new group.

The Russian invasion of Ukraine prompted former Prime Minister Shinzo Abe to float the idea of Japan “sharing” in the possession of nuclear weapons, as is practiced by some NATO members, triggering discussions on it.

The organizations say such a development demonstrated the need for a unified effort by groups in Nagasaki, one of only two cities hit by atomic bombs in history, to widely call for the abolition of nuclear weapons through the treaty.

The new body will be called “Kakuheiki Kinshi Jyoyaku no Kai Nagasaki” (The group for the TPNW in Nagasaki).

The decision to form the new body was confirmed at an organizations' meeting on April 5.

The new group’s activities will include hosting study sessions and attending international conferences.

The TPNW entered into force in January 2021.

The first meeting of the state parties will be held in Vienna from June 21 to June 23.

(This article was written by Masato Tainaka and Mami Okada.)