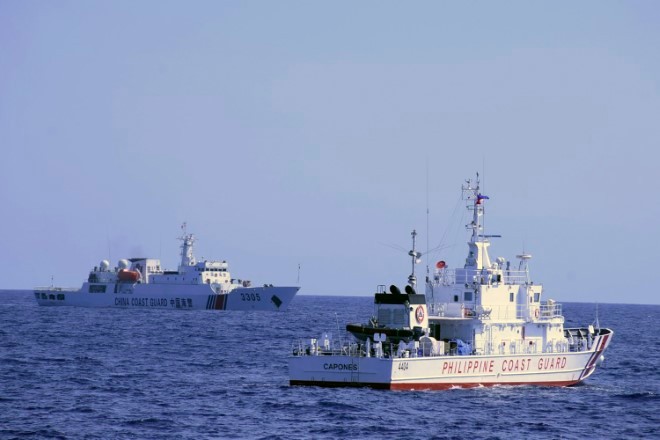 MANILA--A Chinese coast guard ship last month maneuvered for days near a research vessel deployed by Philippine and Taiwanese scientists to undertake a crucial survey of undersea fault lines west of the northern Philippines, sparking concerns among the scientists on board, officials said Thursday.

The scientists on the R/V Legend, including five Filipinos, proceeded with their research despite the presence of the Chinese coast guard ship in the vicinity of the waters straddling the undersea Manila Trench from March 25 to March 30 off the northwestern Philippine city of Vigan in Ilocos Sur province. The Chinese coast guard’s proximity sparked concerns because the research vessel was towing a survey cable in the sea, a Filipino scientist told The Associated Press.

The ongoing offshore survey--a joint project of the National Institute of Geological Sciences at the University of the Philippines and the National Central University in Taiwan--aims to help map offshore faults and other geologic features that could set off future earthquakes, tsunamis and other potentially catastrophic hazards in the region. The monthlong research is partly funded by the Philippine Department of Science and Technology and will end on April 13.

The Chinese coast guard ship maneuvered about 2 to 3 nautical miles (3 to 5 kilometers) from the R/V Legend for several days, according to Carla Dimalanta of the National Institute of Geological Sciences.

She did not say if the Chinese coast guard ship warned the research vessel that it had illegally entered Chinese territorial waters and should immediately move away, a warning China’s coast guard has often issued by radio to foreign ships and vessels cruising near its outposts in the South China Sea, which Beijing claims virtually in its entirety.

China, the Philippines, Vietnam, Taiwan, Malaysia and Brunei have been locked in an increasingly tense territorial standoff in the busy waterway for decades.

The Manila Trench, which runs off the western coast of the main northern Philippine island of Luzon in the fringes of the South China Sea has long been an area of concern because of the potential disaster it could unleash if a major earthquake and tsunami were generated in the busy waterway that borders several countries, including China, Taiwan and the Philippines.

It was not immediately known if the Philippine government has raised its concern over the Chinese coast guard’s movement near the scientific research vessel. Two Filipino officers told The AP without elaborating that the Philippine military was aware of the incident. They spoke on condition of anonymity because of a lack of authority to discuss the issue publicly.

There was no immediate comment from Chinese Embassy officials in Manila.

In one of those dangerous movements, a Chinese coast guard ship moved just 21 yards from a Philippine coast guard patrol vessel and restricted its maneuvering space in the vicinity of the Scarborough Shoal in a “clear violation” of a 1972 international safety regulation that aims to prevent sea collisions, said the Philippine coast guard, which reported the incidents to the Department of Foreign Affairs in Manila.

China’s seizure of Scarborough Shoal prompted the Philippines to bring the disputes to international arbitration. In 2016, a U.N.-backed tribunal invalidated most of China’s claims and said it has violated the rights of Filipinos to fish at the shoal.

China dismissed the ruling as a sham and continues to defy it but has allowed Filipino fishermen to return to the shoal under Philippine President Rodrigo Duterte, who nurtured closer ties with Beijing after taking office in 2016. Despite cozier relations, however, sporadic territorial spats have persisted.

Two weeks ago, U.S. Indo-Pacific Commander Adm. John C. Aquilino told The AP on board a U.S. Navy reconnaissance aircraft that China has fully militarized three of the seven islands it built in the disputed Spratlys archipelago in the South China Sea, arming them with anti-ship and anti-aircraft missile systems, laser and jamming equipment and military aircraft in an increasingly aggressive move that threatens all nations operating in the disputed waters.

China responded by saying that its deployment of “necessary national defense facilities on its own territory is a right entitled to every sovereign country and is in line with international law, which is beyond reproach.”