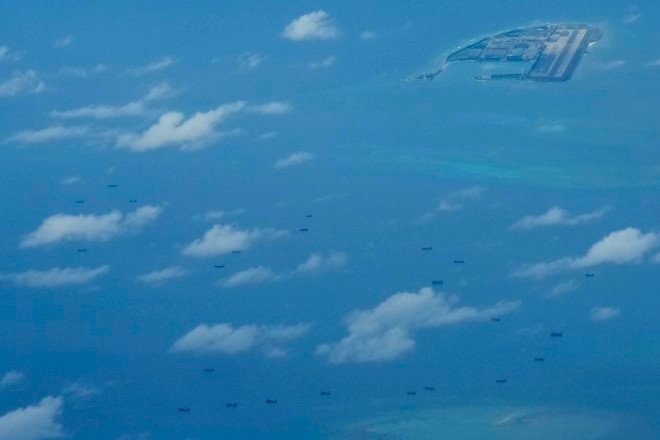 Boats are seen beside Chinese structures and buildings on the man-made Fiery Cross Reef at the Spratlys group of islands in the South China Sea on Sunday March 20, 2022. (AP Photo)

China State Shipbuilding Corp (CSSC) is a key producer of vessels for China’s rapidly expanding People’s Liberation Army Navy (PLAN) and is thought to be building its third aircraft carrier.

Taiwan’s Evergreen Marine Corp has purchased 44 vessels from China since 2018, all but two of which were ordered from shipyards that produce Chinese warships, including CSSC, the Center for Strategic and International Studies (CSIS) said in a report https://features.csis.org/china-shadow-warships.

The Washington-based think tank said foreign companies, including from U.S. allies such as France, also buy ships from CSSC, which the United States has placed on an investment blacklist for U.S. individuals and companies due to its Chinese military links.

CSIS said while there is limited transparency on the flow of foreign capital in China’s shipbuilding industry, “available evidence indicates that profits from foreign orders are likely lowering the costs of upgrading China’s navy.”

CSIS called the foreign contracts “a tangible threat to national security” for some democracies in the region and said companies should consider U.S. allies South Korea and Japan as alternative shipbuilding partners.

Democratically governed Taiwan has complained of increased military pressure by Beijing, which has never renounced the use of force to bring the island under its control.

The imagery “suggests there is direct sharing of resources between military and civilian operations at China’s key shipyards,” CSIS said.

Evergreen said in a statement that all of its containership projects undergo international bidding, and that its contracts with CSSC’s commercial shipbuilding department were “completely different and separate” from CSSC’s military department.

“We believe the civil commercial ship building activities have nothing to do with national naval projects,” it said, adding that it discloses information about its orders to investors and authorities.

China already has the world’s largest navy, with a greater number of warships and submarines than the United States.

Taiwan rejects China’s sovereignty claims and says only the island’s people can decide their future.