Japan to phase out imports of Russian coal and oil 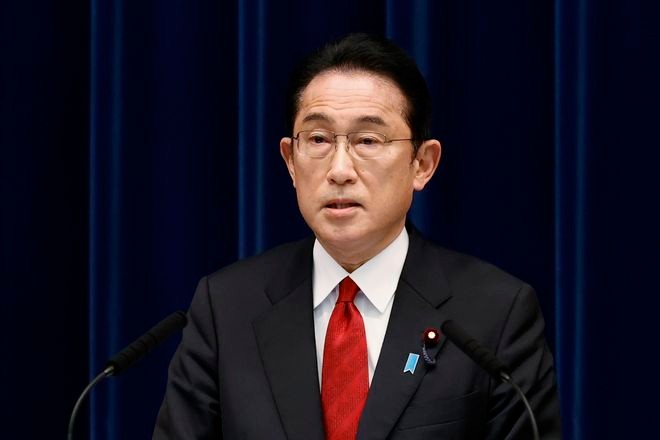 Prime Minister Fumio Kishida speaks during a news conference at the prime minister's office on April 8. (Pool Photo via AP)

Japan announced Friday it is expelling eight Russian diplomats and trade officials and will phase out imports of Russian coal and oil, with Prime Minister Fumio Kishida saying Moscow must be held accountable for “war crimes” in Ukraine.

Kishida said Japan will also ban imports of Russian lumber, vodka and other goods, and will prohibit new Japanese investment in Russia.

It will also step up financial sanctions against Russian banks and freeze assets of about 400 more individuals and groups, including military-linked organizations, Kishida said at a news conference.

He said atrocities against civilians and attacks on nuclear facilities in Ukraine are “severe violations of international law and are absolutely impermissible."

“We are at a critical moment in our efforts to get Russia to stop its cruel invasion of Ukraine and restore peace. Everyone, please cooperate," Kishida said, referring to the sanctions' impact on Japan, such as higher prices for gasoline, electricity and food.

Kishida said the expulsion is based on a “comprehensive decision taking into consideration Russia's invasion of Ukraine.” He added that Japan will do utmost to ensure safety of Japanese nationals and companies still in Russia in case of a retaliation.

Europe and the United States have also stepped up sanctions against Russia, including restrictions on coal imports, following revelations of harrowing atrocities against civilians in Ukrainian cities.

Kishida said the additional sanctions are in line with an agreement by the Group of Seven industrialized nations.

Reduction of fossil fuel imports from Russia is a difficult choice for resource-poor Japan, whose hydrocarbon needs account for about half of its total energy mix. The decision could mean a shift for Japan’s energy policy toward more renewables and nuclear power.

Russia accounts for about 11% of Japanese coal imports and also ranks among the top exporters of liquefied natural gas and oil, according to government data.

Kishida said Russian coal is used industry-wide, from utility companies to cement and steel manufacturers. “We will have to assess the impact first, and will take steps toward Russian coal ban by securing alternatives,” Kishida said, declining to set a timeline for a total ban.

The measures agreed to by G-7 leaders include a phasing out or banning of imports of Russian coal and oil. Trade Minister Koichi Hagiuda said Japan plans to gradually reduce its energy reliance on Russia while seeking ways to reduce the burden on Japanese companies.

Japan had already imposed some sanctions, including freezing assets of top Russian officials such as President Vladimir Putin, restricting exports of goods including sensitive items with dual military use, and removing key banks from an international messaging system known as SWIFT.

Japan is taking a greater role in the international effort against Russia because of concerns about the impact of the invasion on East Asia, where China's military has grown increasingly assertive.

Japan has already faced reprisals from Russia. Moscow recently announced the suspension of talks on a peace treaty with Tokyo that include negotiations over Russian-held islands which the Soviet Union seized from Japan at the end of World War II.

The decision on coal marked a change for Japan, the world's third-largest coal importer, which initially was slow to line up with Western nations banning coal imports.

Earlier on Friday, trade minister Hagiuda said it would reduce imports gradually while looking for alternative suppliers in the wake of sanctions against Russia after its Feb. 24 invasion of Ukraine - a move that highlights a potential shift in import-reliant Japan's energy procurement policy.

Russia accounted for 11% of Japan's total coal imports in 2021, according to the government data. Russia was Japan's fifth-biggest supplier of crude and liquefied natural gas (LNG) in 2021.

Japan imports nearly all of the coal it consumes, making it the third-largest importer after India and China, according to the U.S. Energy Information Administration data.

"We would need to find alternative suppliers or we would face difficulties securing domestic coal which could lead to power outages and such. We need to avoid such a situation," Hagiuda said.

"We will cooperate with Russian sanctions without inflicting a burden on domestic industry."

Kishida said he would work to reduce dependence on other Russian energy sources, including oil, and will compile measures to cope with rising fuel and other price by the end of April in order to shield the Japanese economy.

"The government will compile comprehensive and emergency measures against surging oil and other prices by the end of April in order to urgently and flexibly respond to their impacts on people’s livelihoods," Kishida said.