Fire trucks are mobilized to put out a fire that engulfed a popular Korean barbecue restaurant in Fukuoka’s Hakata Ward on April 9. (Naoki Nakayama) 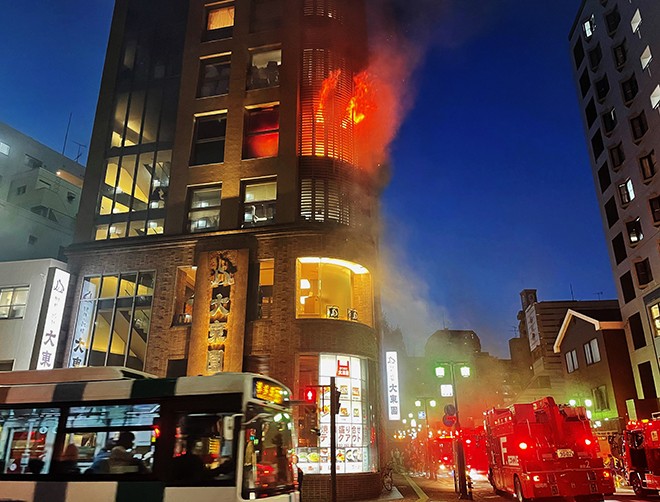 Flames lick the exterior of the seven-story building where the popular Daitoen Korean barbecue restaurant is located in Fukuoka’s Hakata Ward early in the evening of April 9. The fire started on the fourth floor. (Naoki Nakayama)

FUKUOKA--Fire engulfed a popular Korean barbecue restaurant that occupies four floors of a seven-story building here, causing panic in the neighborhood as 20 fire trucks and an ambulance rushed to the scene early in the evening of April 9.

A male worker at the restaurant, Daitoen, in Hakata Ward was taken to a hospital after suffering smoke inhalation but remained conscious, according to police and the city’s fire department.

The restaurant alerted authorities to the fire around 7:05 p.m., saying, “The grill caught fire and got out of control.”

The blaze, although it was put out about 50 minutes after it started, was so fierce it blew out windows on the fourth floor, scaring people nearby as flames started to lick the exterior of the building.

Customers descended stairs outside to safety as soon as the fire started, according to eyewitnesses.

The restaurant, established in 1970, is one of the oldest barbecue restaurants in Fukuoka and located in an area crowded with eateries and drinking establishments.