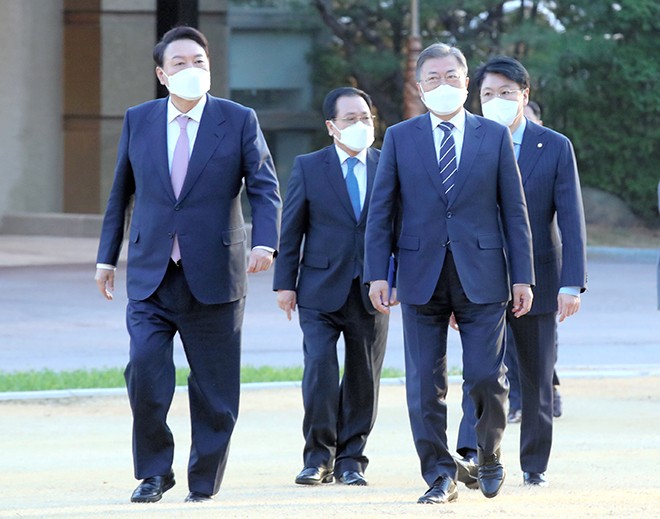 The new South Korean administration of President-Elect Yoon Suk-yeol will be sworn in on May 10.

Preparations are speeding up for Yoon’s inauguration, which is only one month down the road.

Yoon said he is moving the functions of the country’s presidential office from the current Blue House, in central Seoul, to another location so his administration will be closer to the public.

He is eager to create the impression that he is ushering in a new era.

Yoon has openly said he is planning to make a major shift from the foreign and security policies of the current administration of President Moon Jae-in.

Yoon recently sent a delegation of his foreign policy aides to the United States with a personal letter addressed to U.S. President Joe Biden. That likely indicates his belief that the alliance with the United States should be urgently strengthened.

Yoon has also argued that the soured ties with Japan should not be left as they are. He has said he wants to seek a comprehensive breakthrough over a broad range of mutual sticking points, including not only issues of shared history, such as wartime Korean laborers and “comfort women,” but also security and trade.

The comfort women refer to those who were forced to provide sex to wartime Japanese soldiers. Many of the women were from Korea, which was under Japan’s colonial rule from 1910 through 1945.

Those forward-looking overtures by Yoon were rightly made.

Given the current state of bilateral ties, however, we cannot afford to watch patiently over how the incoming administration will address the matter.

That is because legal procedures are steadily ongoing in South Korea for cashing out assets of Japanese companies in the country to pay compensation to wartime Korean laborers who won lawsuits definitively in the nation.

Even if a comprehensive solution to the problem were to be sought, that would require the groundwork to be laid for enabling coolheaded discussions.

Moon’s outgoing administration should strive until the last moment to improve bilateral relations, to lessen the burden that will be carried over to the next government.

It goes without saying that it is desirable for the administration to present a fundamental solution to the question.

Even if that were too much to ask from the Moon administration, it could at least clearly state to audiences both at home and abroad--and with much effect--that it believes that solutions to the pending bilateral issues of shared history should be sought through diplomatic discussions.

Irreparable confrontation would result if the cash-out were to become a reality. South Korea’s judiciary authorities are evidently taking an unusually long time in putting the step into practice because they know the gravity of its consequences.

Responsible remarks by a political leader would provide a reprieve and an opportunity for more talks.

Involvement of the Moon administration in the matter is also desirable from the viewpoint of the political management expected in the future.

South Korea’s current ruling party, which accounts for nearly two-thirds of all seats in the national assembly, will turn into a giant opposition bloc after the Yoon administration is sworn in.

A possible intergovernmental agreement over the issue of wartime Korean laborers could subsequently require related law development and budgetary measures.

It should not be permitted for a draft bilateral agreement to be blocked by the dissent of the South Korean legislature.

The outgoing and incoming administrations should therefore seek mutual understanding during this transition period, because the issues of shared history should be addressed from a broad perspective without turning into a political football of internal politics.

Tokyo should also do away with its inflexible attitude to help avert the biggest ordeal facing Japan and South Korea.

If Seoul has largely been reacting more and more angrily, that is in no small part because the prior administration of former Prime Minister Shinzo Abe, which lasted nearly eight years, ignored inconvenient facts of history and led Japan to be less modest in its stance.

In drawing on the Yoon administration’s eagerness to seek to rebuild bilateral ties, the administration of Prime Minister Fumio Kishida should also show that it is willing to carve out sounder relations with its close neighbor.