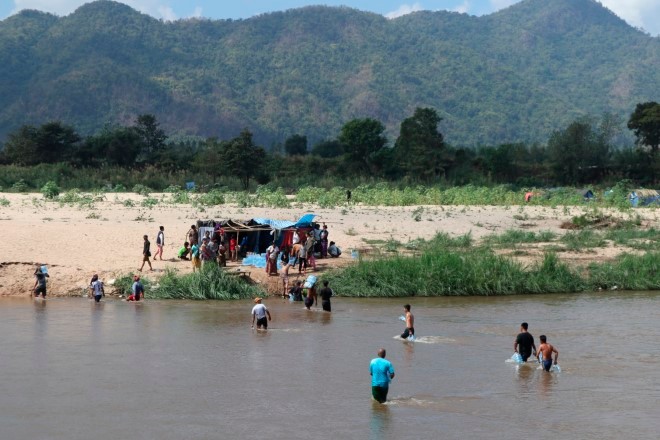 Displaced people from Myanmar wade across a river to carry donated food boxes and water bottles from Thailand into Myanmar, as seen from Mae Sot, Thailand, Feb. 7, 2022. (AP Photo)

Myanmar’s military conducted air strikes on Sunday targeting ethnic rebels in Karen state, as fresh fighting broke out for control of the town of Lay Kay Kaw near the Thai border, according to a spokesman at the rebel group and media reports.

Thousands of residents in Lay Kay Kaw, which is only about 20 kilometers from the Thai border, had already fled fighting in December around the town that has been a refuge for pro-democracy supporters since the army seized power last year.

A spokesman for the Karen National Union (KNU), which is Myanmar’s oldest ethic rebel group, said the army appeared to be reinforcing the area after Sunday’s clashes though he had not yet received reports of fresh fighting on Monday.

“They haven’t retreated at all. They are sending more troops,” said KNU spokesman Padoh Saw Taw Nee, adding the group’s forces had killed 45 soldiers and lost two of its own fighters in Sunday’s clashes. Public Voice Television, which is backed by a shadow government set up since the coup, said the rebels had detained a captain from the Myanmar army during the fighting.

Reuters could not independently confirm the claims and a spokesperson for the military did not answer calls seeking comment. Lay Kay Kaw has been largely under the control of the KNU in recent months, but the army has at times sought to reassert control and fighting broke out last December when troops tried to arrest people in the town. Sunday’s clashes came after the KNU had tried to push back army troops who had entered one district, said Padoh Saw Taw Nee. In response, Myanmar’s military conducted air strikes, the rebels and local media reports said. Residents in Mae Sot, a town on the Thai side of the border said they heard gunfire and what appeared to be explosions. In December, the KNU had called on the international community to establish a no-fly zone in the area to protect civilians.

Myanmar has been plunged into turmoil since the army ousted a civilian government led by Aung San Suu Kyi last year, prompting a bloody crackdown of protests by security forces and the formation of anti-junta militia sometimes allied with ethnic rebels.