Toyota to launch its 1st electric SUV, the bZ4X, in early May 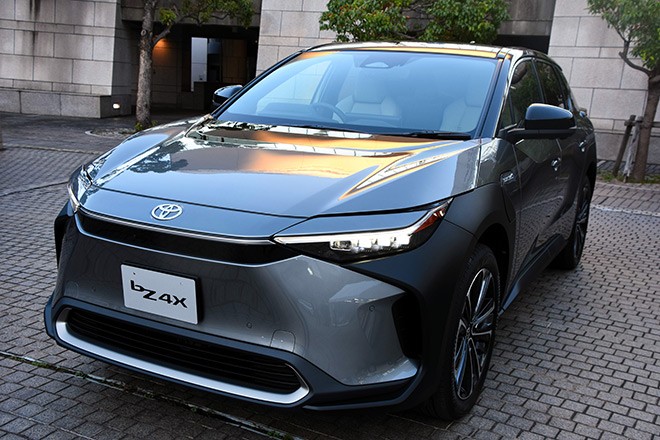 Toyota Motor Corp. announced on April 12 that it will launch its first mass-produced electric vehicle in Japan, known as the bZ4X, on May 12.

Toyota announced its new strategy in December to raise the volume of worldwide sales of electric vehicles to 3.5 million by 2030. The rollout of the bZ4X, a midsize SUV, will mark its first milestone on the road to its goal.

The vehicle will only be offered through leasing in Japan, including to businesses, Toyota said. For individuals, it will mean a fixed-price subscription with monthly fees.

The car can travel up to 559 kilometers on a fully charged battery. The price starts from 6 million yen ($47,800) including taxes. The company will release the amount in monthly fees at a later date.

Toyota anticipates sales of around 5,000 vehicles in the first fiscal year.

Toyota said it has chosen to offer the vehicle through leasing because electric battery vehicles are still not popular in Japan.

Electric vehicles are expensive and there are not enough charging facilities, Toyota said.

The company also noted the used car market for electric vehicles has yet to be established in Japan.

By using lease financing, the company said it can prevent prices of used electric vehicles from plummeting because of deteriorated batteries when consumers resell them.

Toyota said it also benefits from the system because the vehicles will be returned to the company after the leasing period ends and the company can easily collect and recycle the used batteries.

The new vehicle will be available in Europe, China and North America starting from the middle of this year, it said.