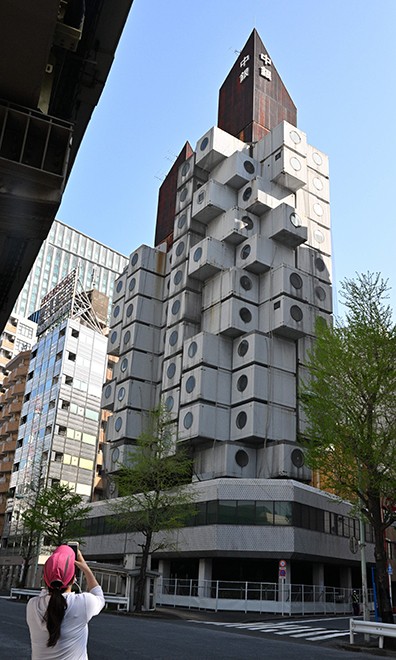 Built a half-century ago as a futuristic architectural marvel that would permanently house tenants, the Nakagin Capsule Tower in Tokyo's Ginza district failed to stand the test of time.

Dismantling work started on the aging structure on April 12, much to the sadness of the building's legions of fans across the world and former tenants.

Six former tower residents gathered in an apartment room nearby on the evening of April 5 to celebrate the 50th anniversary of its completion on April 5, 1972.

They put small candles onto a cake that had an image of the tower in the middle and toasted it with champagne.

DJ Koe, 42, who had rented one of the capsule rooms from 2019, participated in the birthday party.

“I feel sad about the demolition, but I enjoyed living there a lot,” Koe said.

The building, designed by famed architect Kisho Kurokawa (1934-2007), looks like a jumble of blocks stacked at odd angles high in the sky.

The 11-story building (part of it is 13 stories high) comprises 140 box-shaped capsules stacked on top of each other.

Each capsule has a floor space of about 10 square meters, with a round window 130 centimeters in diameter. The center tower connected to those capsules has an elevator and a staircase.

The tower has been known as a representative work of the “Metabolism” architecture movement, which started in 1960. The building was designed to evolve further by replacing spaces and functions in accordance with societal changes.

The capsules were initially assumed to be replaced every 25 years.

The Nakagin group, a real estate operator, asked Kurokawa to design the building and sold the rooms as apartments.

However, the capsules were never replaced with new ones as the architect intended.

According to residents who started an effort in 2014 to preserve and restore the tower, a decision was made in 2007 to rebuild the building into studio apartments.

But the plan was canceled following the collapse of the U.S. investment bank Lehman Brothers.

Tatsuyuki Maeda, 55, the project leader of the preservation effort, has purchased more rooms over the years, held viewing tours of the building and published a photo book on the tower.

About 600 people each month came to visit the building last year. After the demolition was decided, more than 100 members of domestic and foreign media interviewed Maeda.

The dismantling work is expected to take a few months but more than 20 capsules will be preserved after their removal.

Maeda hopes that some will be donated to famed museums while others will be recycled for use as accommodation facilities.

He has already received as many as 80 inquiries.

“The tower was a building that mesmerized people,” Maeda said. “I hope that more and more people will continue to experience and marvel at the wonder of it.”