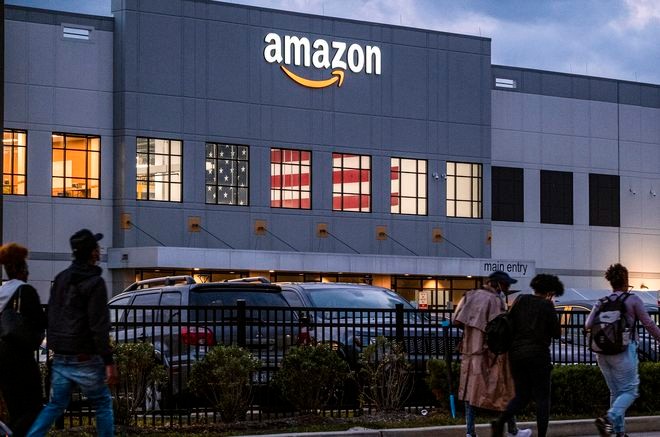 People arrive for work at the Amazon distribution center in the Staten Island borough of New York on Oct. 25. (AP file photo)

In his book "Hired: Six Months Undercover in Low-Wage Britain," British journalist James Bloodworth, who once worked undercover at an Amazon warehouse, says the e-commerce giant had peculiar workplace lingo.

For instance, an employee was never "fired," but "released."

There was no distinction between managers and laborers. They were all referred to as "associates," and Bloodworth was taught that warehouse workers were equal to top executives.

The reality, however, was nowhere near what these "nice" expressions suggested.

He was sometimes made to walk more than 20 kilometers a day, just to collect items from various parts of the warehouse.

Calling in sick resulted in his receiving one disciplinary point, and anyone could be "released" at any time.

The euphemisms were obviously meant to whitewash the brutal working conditions.

But finally, a huge airhole has been opened in the United States, Amazon's homeland.

A labor union was formed at a New York City warehouse after votes in favor outnumbered those against.

"Now that we can negotiate with management as equals, we believe this trend will expand to other places as well," The Asahi Shimbun recently quoted a jubilant union member as saying.

In the days ahead, the union will be demanding higher wages and longer breaks, the report added. The ripples may eventually spread beyond the United States to the rest of the world.

In this day and age, merchandise, as well as freshly cooked meals, ordered online are delivered with incredible speed.

But the convenience may well be in exchange for some people toiling away under the direst of conditions. A system is needed to stop this sort of exploitation, and labor unions can play a crucial role in that.