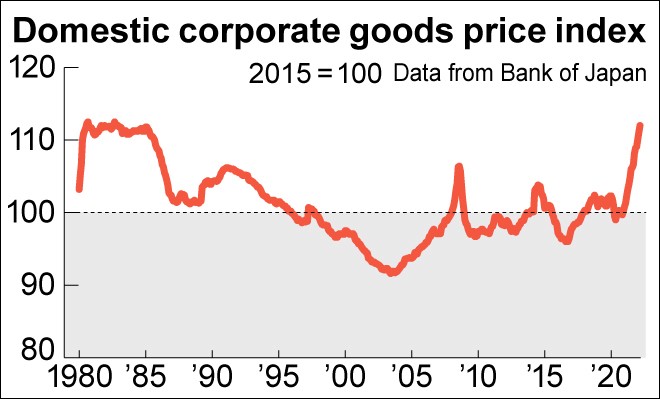 The domestic corporate goods price index for March reached its highest point since 1982, according to preliminary figures released by the Bank of Japan.

Experts are warning that a new wave of price hikes will likely follow in the coming months, even as households have struggled to cope with rising prices since late last year.

The preliminary figure for the March index came to 112, with 2015 used as a base year equal to 100, according to the Bank of Japan report published on April 12.

The CGPI grew by 9.5 percent year on year. It was its second-fastest growth rate logged since 1981, when comparable data became available, after the 9.7-percent jump posted for February.

The sharp rise is attributable to surges in crude oil and grain prices spurred by the global economy’s recovery from the coronavirus pandemic. It was then further pushed up by a supply chain crunch triggered by Russia’s invasion of Ukraine in late February.

The depreciation of the Japanese currency contributed to an increase in prices of imports, driving up oil and coal prices, including gasoline and light oil, by 27.5 percent.

The March index was the 13th consecutive month of rise from the same month in the previous year. The average of the CGPI for fiscal 2021 that ended in March was up 7.3 percent from that for fiscal 2020, the largest growth since 1981.

The big question over the months to come will be how much of these price surges will be passed onto consumer goods and services.

Economists said the rising costs of materials have yet to be fully passed onto consumers, raising concerns about increasing the financial burdens on households.

“CPI growth could hit 2 percent or so in April or thereafter,” said Bank of Japan Governor Haruhiko Kuroda.

Koya Miyamae, senior economist at SMBC Nikko Securities Inc., predicted that the inflation rate will not drop this year.

“It will hover between 2.5 percent and 2.9 percent in June and afterward if the government stops providing subsidies to curb the rise in gasoline prices,” he said. “It would be possible for the rate to top 3 percent if the yen continues to depreciate.”