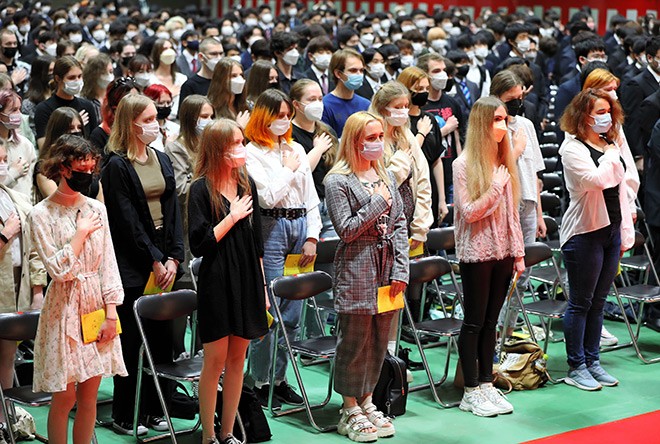 Ukrainian students listen to their national anthem at the entrance ceremony at the Japan University of Economics' Fukuoka campus on April 12. (Tadashi Mizowaki)

CHIKUSHINO, Fukuoka Prefecture--With their eyes on the future and fear for their homeland in their hearts, 64 Ukrainian evacuees participated in the entrance ceremony at the Japan University of Economics' Fukuoka campus on April 12.

“I was sent to Japan for my future," one Ukrainian student said. "I would like to study many things.”

The students came to learn in Japan after fleeing Russia's invasion, and they started their university lives as they thought of their homeland.

“One morning, you wake up and see your nation starting to be destroyed. Can you imagine that?” said Asuka Tsuzuki, the university president. “We would like to educate them to become a bridge between Japan and Ukraine.”

After a message from the Ukrainian ambassador to Japan, the university played their national anthem. The Ukrainian students listened to the music as they put their hands over their hearts.

Marharyta Dahaieva, 20, and Ruslana Konkova, 21--both seniors from the Kyiv National Linguistic University--spoke to the media after the entrance ceremony.

Dahaieva temporarily evacuated to the Netherlands, where her relatives live, and then came to Japan.

Her dream is to become a Japanese and English teacher in Ukraine.

Her parents, who remain in the western part of Ukraine, sent her to Japan.

She said she talks to her parents on the phone every day about what she is studying and enjoying.

Konkova escaped to the Czech Republic with her mother.

Her father and relatives are still in the southeastern part of Ukraine.

She is interested in ukiyo-e woodblock prints, "suiboku-ga" ink painting and other Japanese arts. She hopes she can learn more about them in Japan.

Konkova was thankful for the national anthem being played at the entrance ceremony.

“We're in the middle of a war, so I felt sad" hearing the anthem, too, she said. "My mother is still in the Czech Republic, so I’m really worried about her.”

She said she will send the pictures taken at the ceremony to her family.

The university is headquartered in Dazaifu city near here.