New organizer seeks to get Awa Odori festival back in step 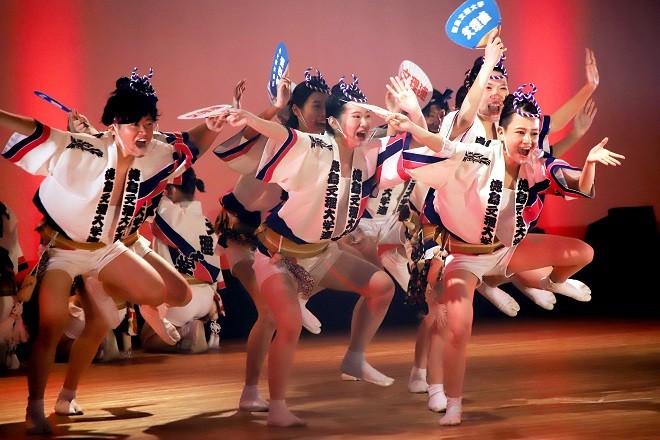 TOKUSHIMA--After stumbling over finances amid the novel coronavirus outbreak, the famed Awa Odori has a new entity to help the dance festival gets its groove back.

The steering committee to preserve the Awa Odori for the future was established on April 8.

The members are looking to spend three years improving the festival’s operating framework, with an eye toward an anticipated tourism boom coinciding with the 2025 Osaka Kansai Expo.

The move came after its predecessor had been dissolved following a dispute between Tokushima city and the festival’s management companies over taking responsibility for the millions of yen owed for the cancellation of the summer 2020 event amid the novel coronavirus outbreak.

The newly formed entity consists of a total of 30 members, including officials from economic, tourist and culture groups and also Awa Odori dancers and citizens selected from the public.

Also among them are the heads of colleges’ Awa Odori clubs, in line with the panel’s goal to “realize a sustainable form of Awa Odori through efforts by and for citizens.”

Topics to be discussed include forming a foundation to bolster the festival’s financial base and adopting a system under which an external inspection organization will monitor the event’s management for increased transparency.

At its initial meeting on April 8 in Tokushima, Katsuko Terauchi, head of the Tokushima Chamber of Commerce and Industry, was elected as the committee’s chair with 26 members in attendance. Some participants took part via the internet.

Tokushima city, the municipality’s cultural promotion corporation and the Tokushima Toshikaihatsu company will serve as the panel’s secretariat.

While the head of a major dancers’ group called Awa Odori Shinko Kyokai is part of the committee, no representatives of the Tokushima Prefecture’s Awa Odori Kyokai dancer association have yet to join.

According to Tokushima city, it asked the prefectural dancer association to participate but the reply was that it “will be difficult for a dancers’ group to work as part of the organizing entity.”

During the meeting that day, panel members asked that a request be made again, describing both of the Awa Odori performer groups as “two inseparable wheels” for the festival.

The former steering organization was disbanded in March last year, citing the “difficulty in continuing organizing the event under the current management scheme and system.”

The municipality then started reviewing the framework to hold the Awa Odori festival. In November, the committee considering the management of Awa Odori suggested that the city set up a new executive committee comprised of young people and representatives of various groups on behalf of local residents.

TO BE SCALED DOWN

The Awa Odori dance festival was held last summer for the first time in two years.

All the performances were conducted indoors except on the final day, when dancers performed outdoors with no one in the audience. In addition, performers and spectators were limited to those from Tokushima Prefecture.

The new committee is planning to hold the festival from Aug. 12 through 15 this summer as usual while accepting visitors from outside the prefecture. With the difficulty in predicting when the coronavirus crisis will end, the event will likely be scaled back.

The committee has five scenarios at its disposal to respond to varying degrees of infection spread.

Under plan A, all the events, including the preliminary performance on Aug. 11, will be held at free sites and other locations where paid admission is required.

Under plans B and C, some of these performances would be canceled.

Only livestreaming of dancers performing indoors with no spectators will be conducted under plan D. The fifth option is canceling the festival altogether.

As dancers’ groups are preparing for the festival to be held, the committee will temporarily proceed with plan A.

However, the paid venues will be reduced from four to two. Fee-based admission sites will be installed only in the Aibahama and Minami-Uchimachi districts.

All the seats at the paid venues will need to be booked beforehand for all the performances, including the preliminary one, and there will be no non-reserved seats. This will be done as part of the efforts to more safely control visitors.

The committee is also considering selling the naming rights for paid-admission venues to generate additional revenue.

Ticket sales for groups and individual spectators are scheduled to begin on June 1 and July 1, respectively.