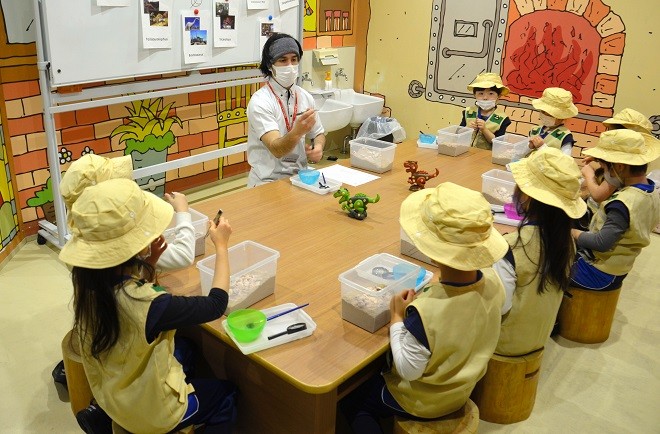 A career-education program is offered in English at Kids Duo International, which is nongovernment accredited, in Yokohama in January. (Shimpei Doi)

Yaruki Switch Group runs a branch of Kids Duo International near a station along the Yokohama city subway line, which caters to parents wanting a "bilingual kindergarten."

“I chose the facility because I want my children to learn English,” said a 49-year-old company owner whose children, ages 4 and 6, attend the branch of Kids Duo International.

Almost all communications between children and teaching staff are conducted in English at the kindergarten. Intellectual training, sports lessons and a career-experience program to dig for fossils are available there.

“My children are mastering English just as they mastered Japanese,” he said.

The branch is one of the largest kindergartens not accredited under the Child Welfare Law in Yokohama.

The establishment’s fees, including the school bus fee, computer programming and other extracurricular courses, can reach as much as 130,000 yen ($1,034) per month on average.

Seigi Murai, director of the Yokohama center, however, described the expense as reasonable.

“Children need only attend our facility to receive every kind of teaching program they could want,” said Murai. “It’s also not so costly given the preschool-education subsidy."

While the Yokohama facility accepts 342 children, the quota has nearly been reached in April.

Seventy percent of the facility’s customers are parents who both work, according to Murai.

“Mothers and fathers, as well as their grandparents, investing in a child is now sometimes collectively called having ‘six pockets’ with which to pay,” he said.

“People are spending more money on each child.”

Operators are vying to add new value to their offerings to win over parents with small children, as spring is an important season for such businesses to pull in students who have just started kindergarten and school.

Yaruki Switch Group has 10 kindergartens similar to the Yokohama one in urban regions.

Yaruki Switch Group believes children who have left Kids Duo International will rely on such afterschool offerings throughout their time in elementary, junior and senior high school.

Yukiko Ono, a director at Gakken Educational Co., which owns prep schools nationwide, said small children are an “important target” and that the competition has been “increasingly intensifying.”

Gakken Educational in July last year acquired the Mebae Kyoshitsu intellectual training business, under which 200 educational institutes for those aged 1 or older are offered within Ito-Yokado, Aeon and other types of shopping centers.

The acquisition was intended to reach out to far younger students.

Stating there still are “more areas where we can put our schools” throughout the nation, Gakken Educational is looking to introduce 10 establishments every year from now.

Data from Yano Research Institute Ltd. shows the education service market is anticipated to reach 2.8 trillion yen in fiscal 2021, up 5 percent from the previous year.

Though the birthrate continues dwindling, stable demand has created strong sales for lessons for small children to help them pass school entrance exams. The intellectual practice offerings are believed to be seeing growing profits as well.

On March 28, Riso Kyoiku Co., the operator of the Tomas personal tutoring school, announced it will team with a kindergarten provider in the hopes its curricula will be broadly used.

Its affiliated school, Shingakai, famed for providing services for those set to take entrance tests for prestigious elementary schools, will initiate an afterschool child care center in April for first- to third-graders at elementary schools inside a Konami Sports Co. facility in Tokyo’s Shinagawa Ward.

The students will be able to take sports lessons via Konami.

Under the plan, such an afterschool care facility will be introduced elsewhere to discourage customers from using rival businesses.

“We will widen our enclosing tactics to lead students to Tomas and other services,” said Katsuya Nakanishi, a director of Shingakai.

“We will survive by making ourselves stand out from other enterprises.”