Support widens for non-Japanese in Osaka district hit by tragedy 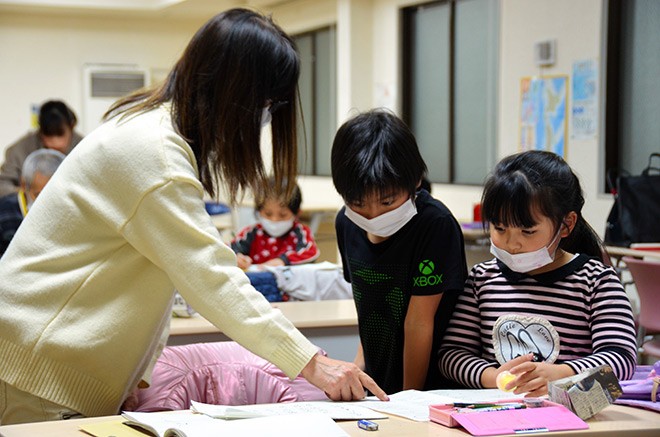 OSAKA—Spurred by a family tragedy a decade ago, a community here continues to band together to support non-Japanese residents and parents who are struggling to get by.

Volunteers, businesses and public officials are offering language lessons, employment tips and other services to help ensure that residents in the Shimanouchi district of Osaka’s Chuo Ward do not feel socially isolated.

The district is home to many Chinese- and Korean-style bars and restaurants. About 30 percent of Shimanouchi’s 6,000 or so residents are foreign nationals.

Many work in the Minami entertainment area on the west side of the district. And many have struggled to adapt to life in Japan, particularly if they are raising children.

“The pandemic has made life really hard for some households,” said Kazuto Yamazaki, a former principal at an elementary school in the district. “I wouldn’t be surprised by a repeat of the tragedy 10 years ago.”

Yamazaki and others are trying to prevent that from happening.

The incident in April 2012 involved a 29-year-old Filipino woman, her 6-year-old son and her 4-year-old daughter.

The woman came to Japan in 2001 and worked at various places, including as a singer at a diner, city government officials and other sources said.

She married a Japanese man, and they had two children. But the parents divorced.

The woman and the children moved to Shimanouchi in 2011, and she worked at an eatery at night. A friend looked after the children when she was working.

The stress from working night shifts and raising her children in the daytime often drove her to tears, acquaintances said.

She asked for advice when a caseworker from the Chuo Ward government visited her home.

The city’s Child Guidance Center was notified of the family’s case after the woman’s son was found wandering alone on a street and taken into protective custody by police. A neighbor also notified police about a child crying in her home.

“I got the impression that the woman loved her children,” an official involved in the case said. “I never sensed there was any problem.”

The woman and her son attended the entrance ceremony at a local municipal elementary school on April 6, 2012. She used a tablet computer to take photos of the boy, sources said.

Yamazaki, the school’s principal at the time, said the woman asked him what items her son should put in his pencil case.

Yamazaki, now 67, said he picked the required school supplies from her bag and introduced her to her son’s homeroom teacher.

Nine days later, early in the morning, the woman killed her son and seriously injured herself and her daughter in a murder-suicide attempt.

She was arrested on suspicion of murder, but prosecutors decided not to indict her, saying she could not tell right from wrong in her mental state at the time of the boy’s death.

The woman was repatriated to the Philippines.

A city government panel’s inspection report released the following year said the mother “found (emotional) support in her interactions with compatriots who were also parents at (her son’s) kindergarten, and she felt worried that she could lose those interactions.”

The report also said the mother “grew extremely confused due to her isolated circumstances.”

Efforts to support non-Japanese parents and prevent them from feeling isolated continue to emerge in the Shimanouchi district.

Between 10 and 20 Filipino women now gather at a neighborhood association hall in the district on Sunday mornings to study Japanese.

Yamazaki, the former principal, set up Kodomo Kyoshitsu in 2013 and recruited people who were helping foreign residents.

Around 30 children from non-Japanese households get together once a week for tutoring by neighborhood residents and university students.

Many parents in the neighborhood have lost their jobs at bars and restaurants during the novel coronavirus pandemic.

Kodomo Kyoshitsu started the Japanese language course for adults because mothers said they wanted to study the language and look for daytime jobs.

The group also provides a job-hunting tutorial course that teaches people how to compile resumes and offers rehearsals for interviews.

The circle of help is expanding.

The Chuo Ward government, for example, began providing support to non-Japanese parents as part of its official program in fiscal 2020.

Group members have taken part in the traditional summer “Bon odori” dance festivals held in the neighborhood. They have also organized counseling sessions.

Shima Room in 2017 became the district’s first “children’s cafeteria,” which are restaurants that provide cheap meals to boys and girls from cash-strapped families. Shima Room also supports many non-Japanese households in the neighborhood.

“We have been working with the determination to prevent a repeat of the tragedy,” said Megumi Hara, the 35-year-old head of Minami Kodomo Kyoshitsu’s executive committee. “A support network is gradually forming between members of the neighborhood community, schools and public administration bodies who share our thinking.”