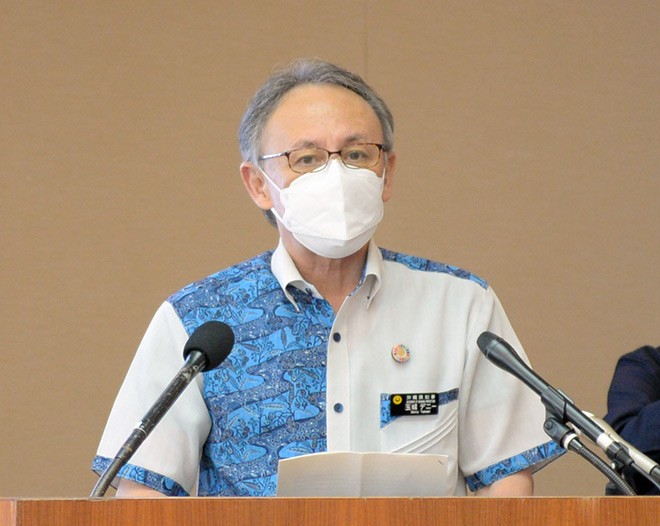 The panel, which advises the health ministry, said at its meeting on April 13 that the largest surges have occurred mainly in less-populated areas of eastern Japan, Shikoku and Kyushu.

The increase rates in those prefectures have widened from those seen in the three major urban areas of Tokyo, Osaka and Aichi prefectures, the panel said.

Okinawa Prefecture, where new COVID-19 cases have been increasing since the end of March, saw its daily average rise 1.22 times.

“We have to acknowledge that our prefecture has entered the seventh wave of infections,” Okinawa Governor Denny Tamaki told a news conference on April 7. “We have to consider introducing stronger anti-virus measures, including a request for the government to impose pre-emergency measures.”

The daily average was up 1.01 times from the previous week in Tokyo, 1.12 times in Osaka Prefecture, and 1.05 times in Aichi Prefecture.

In Osaka and Aichi prefectures, the figure inched upward after remaining flat.

“The increase rate in large urban areas is slow, but it is rapid in regional towns and cities, so we need to pay attention,” Takaji Wakita, the panel chair who heads the National Institute of Infectious Diseases (NIID), said at a news conference.

In some regions, the occupancy rate has been rising, but in other regions, it is almost unchanged, it said.

“The number of new infection cases overall has been on the increase, but the occupancy rate of hospital beds remains at a low level,” Kishida said at an Upper House plenary session on April 13. “At this moment, no prefectural government has requested pre-emergency measures. I don’t think pre-emergency measures are immediately needed in the current situation.”