Kuroda’s words drive yen to weakest level vs. dollar since 2002 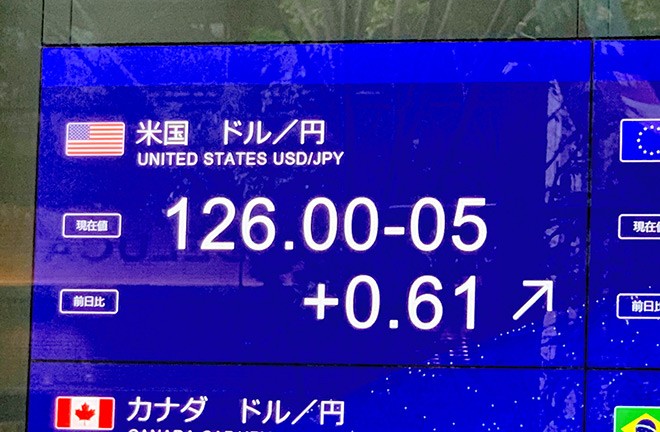 A sign in the Marunouchi district of Tokyo shows the yen at 126 per dollar on April 13, the lowest level in nearly 20 years. (Taiki Koide)

A comment from the Bank of Japan governor pushed the yen to its weakest level against the U.S. dollar in nearly two decades and fueled expectations of a further depreciation of the Japanese currency.

“We will support economic activities that are still recovering from the pandemic by persistently continuing with our powerful monetary easing policies,” Haruhiko Kuroda, the central bank chief, said in a speech in Tokyo on April 13.

The yen immediately plunged to 126 per dollar, the lowest level since May 2002.

Currency trading insiders said Kuroda’s comment indicates the Japanese central bank has no means to prop up the yen. Some experts predict the yen will drop to as low as 130 per dollar.

The Japanese currency has tumbled by more than 11 yen against the dollar since March, when the Federal Reserve Board raised interest rates for the first time since 2018.

The BOJ, on the other hand, has maintained its monetary easing policies, keeping Japan’s interest rates low.

These divergent central bank policies have increased yen-selling and dollar-buying.

Some market players had predicted the BOJ would change its policies because the weaker yen is increasing prices of imported products, threatening to further strain the finances of businesses and households that are already reeling from the novel coronavirus pandemic.

“(Kuroda’s comment) warranted yen-selling because it confirmed the BOJ has no plan to rectify the depreciation of the yen with monetary policies,” an economist from a major securities firm said.

On the evening of April 13, Finance Minister Shunichi Suzuki tried to calm movements of the yen.

“Sharp fluctuations in exchange rates are very problematic,” he said. “We will observe the market carefully.”

The Japanese government last intervened in the foreign exchange market in 2011 to stabilize rates that were moving wildly in the aftermath of the Great East Japan Earthquake and tsunami disaster.

However, some experts cast doubts on whether another intervention would be effective.

“If the yen falls to 130 per dollar or beyond, criticism about the yen’s depreciation will escalate and the government could intervene,” said Tsuyoshi Ueno from the NLI Research Institute. “However, if the differences between the U.S. and Japanese monetary policies remain obvious, the government’s intervention will not be so effective.”