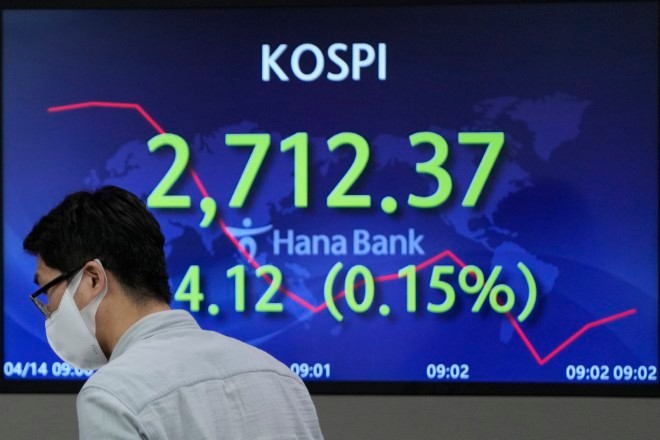 BANGKOK--Asian shares were mostly higher Thursday after an advance on Wall Street that ended a three-day losing streak.

Investors appeared to brush aside fresh evidence that inflation remains widespread in the U.S. economy according to a U.S. government report that rising energy costs pushed wholesale prices up a record 11.2 percent last month from a year earlier.

That report followed news a day earlier that U.S. consumer prices remain at their highest levels in generations.

Rising prices are driving the Federal Reserve and many other central banks to tighten monetary policy by raising interest rates, among other measures, to help cool the surging demand that is contributing to the problem.

South Korea’s central bank raised its benchmark interest rate by 25 percentage points to 1.50 percent. That was its fourth increase since August 2021. The Kospi in Seoul slipped less than 0.1 percent to 2,715.27.

Shares in Singapore were flat after the Singapore Monetary Authority tightened its policy by adjusting currency exchange rates in a more aggressive move than had been expected. It also raised its forecast for 2022 inflation to 2.5 percent-3.5 percent from 2.0 percent-3.0 percent.

Hong Kong’s Hang Seng rose 0.8 percent to 21,549.12 and the Shanghai Composite index advanced 0.7 percent to 3,207.85 after the government indicated China’s central bank may ease policy to counter the blow to its slowing economy from pandemic-related shutdowns in major cities like Shanghai and Guangzhou.

U.S. stock and bond markets face a shortened week and will be closed on Friday for the Good Friday holiday.

On Wednesday, the S&P 500 index rose 1.1 percent to 4,446.59, breaking a 3-day losing streak brought on by persistent worries about inflation and the tough medicine the Federal Reserve is planning to use against it.

Travel-related companies were among the biggest gainers. Delta gained 6.2 percent after it reported strong revenue during its first quarter and solid bookings. Technology stocks also gained, while banks slipped following a disappointing earnings report from JPMorgan. It fell 3.2 percent after revealing a sharp drop in profits after writing down nearly $1.5 billion in assets due to higher inflation and the Russian-Ukrainian War.

Inflation may be peaking but will likely stick around for awhile as cost pressures filter their way through the markets.

Russia’s invasion of Ukraine has raised volatility for energy prices since oil supplies already were tight as demand rises with the waning of the pandemic. U.S. crude oil prices are up roughly 40 percent for the year, driving up gasoline prices and giving inflation’s a bigger hit on people’s wallets.

“On the geopolitical front, the Ukraine crisis continues to weigh on sentiment, with markets watching for any signs of further deterioration,” Anderson Alves of ActivTrades said in a commentary.

Companies in various industries have been raising prices to offset rising costs and maintain or increase their margins.

Investors will get more details on how companies and consumers are dealing with inflation as more companies report their latest financial results. Insurer UnitedHealth Group and banks Wells Fargo and Citigroup are due to report their earnings on Thursday.

Also Thursday, the Commerce Department will release its retail sales report for March, which will show whether and where consumers are pulling back on spending.