Subaru suspends shipments of 3 car models due to engine defects 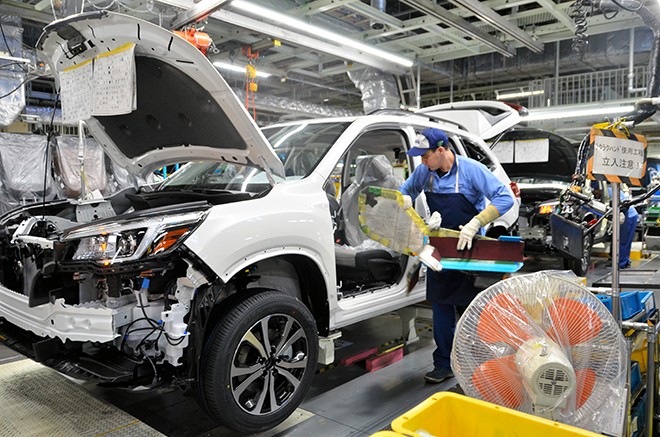 Subaru Corp. is hitting the brakes on shipments for three of its popular car models manufactured in Japan after it discovered a problem with the engine sensors.

The major automaker is expected to spend two and a half months looking into the causes and take corrective measures before it resumes shipments.

The company said it will also halt production in the coming days.

Subaru has already been adjusting production due to a shortage of semiconductors.

The long-term suspension of production and shipments of its main three models is expected to hit the automaker's bottom line.

Subaru announced that among its horizontally opposed engines, it found defects in the sensor parts of its CB18 type engines that have a displacement of 1,800cc.

The CB18 type engine, which was invented by the company, is installed in its main three models for domestic sales: the Forester and Outback SUVs, and the Levorg station wagon.

Those models are assembled at the main factory and the Yajima factory at the Gunma Plant in Ota city, Gunma Prefecture, but their production will be halted in late April.

A Subaru representative said that the company will stop production “because we need to conduct a full quality control inspection and respond appropriately.”

The company official added that Subaru uses other types of engines for sales abroad and that they have not exhibited these issues.

The car manufacturer is considering how to respond to customers who have already bought the three models.

If the vehicles do not meet the safety standards, Subaru will issue a recall and notify the transport ministry.

The three models, including those carrying other types of engines than the CB18, accounted for almost half of the automaker's domestic sales, which were about 101,000 units in 2021.

A shortage of auto parts and semiconductors amid the COVID-19 pandemic forced the company to reduce production by 210,000 units between April and December 2021.

Growth was originally forecast for its net profit for the fiscal year ending in March 2022, but in February, the forecast was revised downward to show a decline in the profits.

This further reduction in production brought about by the discovery of the engine problems is likely to send Subaru into an even stronger spinout.